There are 13 endemic bird species, 29 endemic subspecies and 10 restricted range bird species in the forest reserve. As there are endemic as well as restricted species, Dunumadalawa Forest Reserve is considered as a habitat island in the midst of a city. As such, environmentalists are of the view that the forest reserve should be conserved due to its biological significance and unique features.

The forest reserve has an area of approximately 480 hectares. The forest reserve encompasses the watershed for Kandy City’s main reservoir fed by the two main streams, Dunumadalawa Oya (Oya meaning stream) and Roseneath-ela (ela meaning canal). The huge tank in the middle of the forest supplies drinking water to Kandy City.

According to folklore, this forest reserve dates to the Kandyan Kingdom. The name Dunumadalawa in Sinhala refers to the place where bows were hardened using mud. During the British Colonial Era, there had been tea, coffee and cocoa plantations in the forest reserve and deforestation had taken place within the range. As such, this forest reserve is an abandoned tea, coffee and cocoa estate. As there had been a shortage of water in Kandy City due to deforestation and commercial plantations such as tea, rubber and cocoa, in 1910, the British had built two reservoirs in the former forest reserve and planted trees too. As a result, Dunumdalawa Forest Reserve that exists at present is considered as a secondary forest as the majority of trees in the reserve were planted after 1910.

As the forest reserve is a paradise for nature lovers and for those who want to relax amidst nature, there are avifauna enthusiasts, nature lovers, undergraduates and researchers who spend many hours studying the fauna and flora. 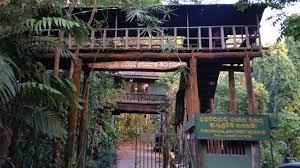