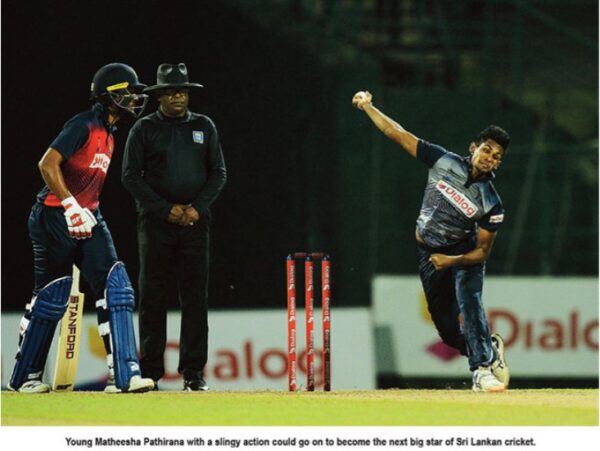 Schoolboy Matheesha Pathirana has become the talk of the town after his new ball burst in the SLC T-20 League that concluded at Pallekele this week. For bowling with a slingy action, Pathirana has been nicknamed Podi Malinga as his action is identical to that of Sri Lankan fast bowler Lasith Malinga.

Still a schoolboy at Trinity College, Pathirana represented Sri Lanka in the Under-19 World Cup last year at the age of 17. Currently, he is 18 and eligible to play the next World Cup as well and he has been included in the pool.

In the recent T-20 League at Pallekele, SLC Greys had maintained an unbeaten run throughout the league stage and for the final, Head Coach and former Sri Lanka cricketer Upul Chandana decided to throw Pathirana in the deep end. It was a gamble. But young Pathirana came off with flying colours.

Usually playing a final against the big boys, it could add pressure to a teenager but Pathirana had been given license by coach Chandana and captain Dasun Shanaka to go out all guns blazing and he gave his team a superb start.

First, he dismissed danger man Avishka Fernando as the opener was dismissed in the third over of the innings. SLC Reds promoted Seekkuge Prasanna to do some pinch-hitting but that backfired as Pathirana in his next over accounted for the experienced Prasanna and Reds never recovered. Pathirana had derailed Reds’ run chase.

Despite being still at school, Pathirana has been in high demand. In February this year, he had international exposure playing in the T-10 League in UAE and was the youngster player in the competition again in the SLC T-20 League.

Pathirana started his cricket at Ranabima Royal and then Trinity offered him a scholarship for the Under-17 season. He has not looked back since then knocking off batsmen with his raw pace and unusual action. Like Malinga in the good old days, most of Pathirana’s dismissals are either bowled or trapped leg before wicket.

Pathirana is a quick learner. Already he is deceiving batsmen with slower balls, yorkers, wide yorkers, and short balls. Although he is young, several batsmen who played in the tournament seem to have conceded that he is a headache. It certainly is a good headache to have given our recent struggles.

Pathirana is of course not the finished product. There are few concerns about how he lands his foot and his follow-through but he has got time to iron out these deficiencies moving forward.

SLC’s coaches were excellent with the way they managed Lasith Malinga. They had identified him as a 17-year-old. They nurtured him so well for three years before letting him loose against the Aussies in 2004 and he was a terror. Adam Gilchrist, Matthew Hayden , and the rest were struggling. Malinga became an icon from thereon.

All in all, the T-20 League in Kandy was very much the need of the hour. It helped us to identify many young players with potential. Podi Malinga was one of them.