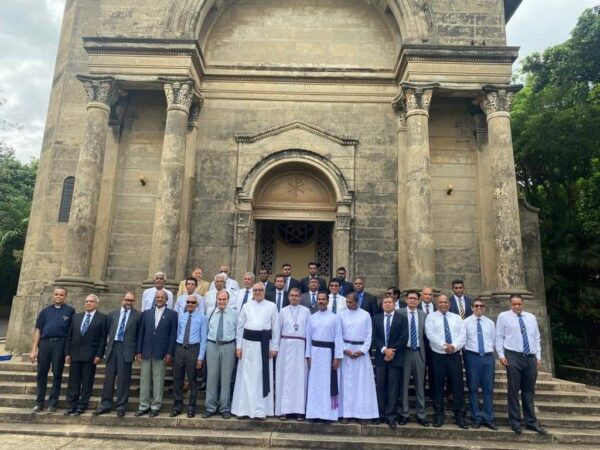 One of the things that comes foremost to any Thomian’s mind is the indebtedness and gratitude owed to the First Headmaster of S. Thomas  College at Gurutalawa, Dr Rolo L. Hayman who was also the
longest serving Sub Warden at STC Mount Lavinia simultaneously for over 20 years.
STC at Gurutalawa was modeled after Gordonstoun School in Elgin, in the north of Scotland that had been founded by Kurt Hahn and attended by Prince Philip, Duke of Edinburgh as well as Charles, Prince of Wales.

Warden Canon R. S. De Saram declared that STC at Gurutalawa and STC Mount Lavinia were one and the same school and not two Colleges. Warden C. H. Davidson remarked quoting the poet William Wordsworth: “TWO Voices are there; one is of the sea, One of the mountains; each a mighty Voice…”
Dr Hayman had taught the students at Gurutalawa to walk with honour and manifest character and integrity in everything they did. A simple tour of the Hayman-Foster Museum in Gurutalawa would convince any visitor of Dr Hayman’s commitment to develop a special brand of Thomians on solid principles and equip them for the real world through formation in tough terrain. The fruit orchard , the well equipped farm, horse riding, house building from bricks made in the school, the strict disciplinary proceedings daily from dawn to to dusk in the classroom, student Societies, Sports activities, Scouting and the Swimming Pool and much more was unique in the history of S.Thomas College at Gurutalawa .

Dr Hayman had donated a great part of his personal wealth to S.Thomas Mt Lavinia and to Gurutalawa  . The swimming pool at STC Mt Lavinia ( when it was virtually unheard of in Ceylon ) , the Swimming Pool In Gurutalawa, most of the College at Gurutalawa , and some buildings and assets in Mt Lavinia , stand
testimony to his generosity . Thomian Fairs were not needed to raise finances , as Dr Hayman donated his personal wealth to S. Thomas  and repeatedly for many decades. He had not wanted records to be kept off it. The story is told when Warden De Saram confided in him saying quote …………. Rolo, I have no money to run the School , Dr Hayman had sold one of his valuable properties in Britain and brought the money to STC.

It is of great significance that S.Thomas College, Mount Lavinia now observes a Gurutalawa Day annually, introduced a few years back , with a special Chapel Service , General Assembly and a One Day cricket match for a Challenge Trophy in memory of Dr Hayman and Gurutalawa . The Royal Thomian Water Polo encounter is played for the coveted Dr R. L. Hayman Memorial Trophy and has come to be simply called ‘The Hayman’! Many other awards and prizes at both Mount Lavinia and Gurutalawa are fitting tributes to this legend who was a “The Man for All Seasons ” .

Apart from the help he gave the School, Dr Hayman had also helped the Gurutalawa village and the people generously as well in many ways and some monuments remain to date .

Dr. Hayman had come to Ceylon initially for the Propagation of the Gospel;. Warden K. C. McPherson (1926-1930) wrote of the recruitment of Dr. Hayman ~ “In the year 1928, I went to England on short leave and while I was there I met four men. Dr. R.L.Hayman, Rev.A.J.Foster, Rev.J.G. Elliot and W.T.Keble, who wanted to return with me to Ceylon”. All of them subsequently became members of the Staff. Dr. Hayman is said to have personally coached Allan Smith, the only representative from Ceylon, for the Olympic Diving event. He was also responsible for coaching the Ardnt brothers who excelled in the All Ceylon two-mile swim. He had made it a point to be on the spot, in Dover, when V.S.C.Anandan successfully swam the English Channel. Anandan had already swum across the Palk Strait . An entry in the Guinness Book of Records credits Anandan for creating a record for Treading Water. Anandan is said to have begun swimming in Gurutalawa .

On April 5th 1942 Warden De Saram was asked to hand over the School premises at Mount Lavinia to the British Armed Services within five days. Dr. Hayman was the Sub- Warden then. He was sent to Gurutalawa to make provision for a Branch of the School. Fortunately, in February 1942, Mr. and Mrs.Leslie de Saram, relatives of Warden De Saram had offered to give their 46 acre Gurutalawa Farm with its orchard, buildings, equipment, furniture and livestock, to the school.

This magnanimous offer was gratefully accepted and in the space of just two months S. Thomas College, Gurutalawa was born and began to thrive with Dr. R.L.Hayman, at the helm as the First Headmaster. The school began as a Boarding School . The Big Match cricket teams during the World War 2 period were trained and coached in Gurutalawa , on rather shrub-type land . The College team has fared well and even World War 2 could not stop the forward march of S.Thomas’ at Gurutalawa .

Dr Hayman was the longest serving Sub Warden and is said to have politely declined the offer to be Warden when Canon De Saram retired in 1958 . He opted to be at Gurutalawa till he departed from Ceylon in 1964 .

The buildings in Gurutalawa bear testimony to this dedicated man whose very ambition was to mold students in his unparalleled image. He was in Mount Lavinia as a teacher, Coach and Sub-Warden. He founded Gurutalawa together with Warden de Saram and nurtured it with Canon A. J. Foster. Today we
have a portrait of him along with a commemorative tablet in the Dr. R.L. Hayman Science Laboratory at Gurutalawa . The words inscribed, “To spend and be spent in the service of others” sum up the purposeful life of this sincere, godly man, who did much while playing a leading role in the lives of
students from S. Thomas; at Gurutalawa and Mount Lavinia where the Swimming Pool was rededicated to his memory in 2000.

Dr Hayman was the first teacher in Ceylon with a PhD from Britain and awarded the prestigious  MBE  by Her Majesty the Queen for his contribution to broader education in the Commonwealth Ceylon .

His resting place is in the General Cemetary Bounemouth / Dorset  , approaching from the East Gate , a few meters to the right side , under a shady tree facing the majestic Chapel entrance  .
History records Dr R L HAYMAN as one of the greatest philanthropists that STC has ever had and I doubt we will see another of that high caliber and esteem .

The Thomian fraternity must continue to relive the Dr Hayman Spirit, whose stature we will never see again . Dr Hayman was awarded the MBE by Her Majesty the Queen  in later years , in appreciation of his services in Ceylon being a Commonwealth country .

A Guru Thomian was easily identified , as they held their own outstanding identity  both in studies and Sports at Mount .

I was privileged to be invited as the Hony Secretary of the STC at Gurutalawa OBA , being the only non-Guru Thomian , though I studied at STC Mount  and was given Hony Membership of the Gurutalawa OBA .

Grateful thanks at all times respected Sir ~ we bow in reverence to you eternally .

Former Hony Secretary of the STC at Gurutalawa OBA 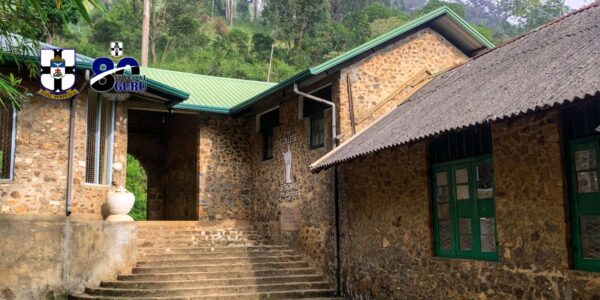 S. Thomas’ College Mt. Lavinia will join STC Gurutalawa in celebrating its 80th anniverssary, with a service of Thanksgiving at 8 am on Wednesday the 22nd of June, followed by the traditional Cricket match between the two schools for the Hayman-De Saram Trophy. All old boys and wellwishers are welcome to attend and are requested to park in one of the two car parks at either end of the De Saram Road entrances to the school. Please refrain from parking on Hotel Road, College Avenue or De Saram Road.

S. Thomas’ College at Gurutalawa was a serendipitous outcome of World War II (1938-1945). In the East, when the threat of war shifted to the Indian Ocean with the advance of the Imperialist military forces of Japan, Ceylon as the Island was then known, and Trincomalee harbour, became strategic objectives under imminent attack. The College at Mount Lavinia was consequently requisitioned by the British forces and on the 9th of April 1942 Dr. R.L.Hayman, the Sub-Warden was sent to Gurutalawa to prepare a branch for the school

The school opened at the Gurutalawa Farm on 12th May 1942 with Dr R L Hayman, the Sub Warden as Headmaster. The Farm with all its livestock and facilities had been donated to the College by Mr and Mrs Leslie de Saram earlier that year.