Home  ⁄  Article  ⁄  ‘Do what you can, with what you have’-BY PRAMOD DE SILVA
Jul 17, 2022 Posted by Canadaadmin In Article Tagged Lessons Learnt And Reconciliation Commission, Nelson Mandela

‘Do what you can, with what you have’-BY PRAMOD DE SILVA

“I learned that courage was not the absence of fear, but the triumph over it. The brave man is not he who does not feel afraid, but he who conquers that fear.” – Nelson Mandela

Nelson Mandela International Day, also known as Mandela Day, is an international observance in honour of the revolutionary Nelson Mandela, celebrated annually on his birthday, on July 18 (tomorrow). His 104th birth anniversary falls tomorrow. The day was officially set by the United Nations in November 2009, with the first observance of Mandela Day held on July 18, 2010. Nelson Mandela devoted his life to the service of humanity — as a human rights lawyer, a prisoner of conscience, an international peacemaker and the first democratically elected president of a free South Africa.

November 2009 – in recognition of the former South African President’s contribution to the culture of peace and freedom, UN General Assembly declared July 18, “Nelson Mandela International Day”. Resolution A/RES/64/13 recognises Mandela’s values and his dedication to the service of humanity in: conflict resolution; race relations; promotion and protection of human rights; reconciliation; gender equality and the rights of children and other vulnerable groups; the fight against poverty; the promotion of social justice. The resolution acknowledges his contribution to the struggle for democracy internationally and the promotion of a culture of peace throughout the world.

In 2009, when the United Nations General Assembly declared Nelson Mandela’s July 18, birthday Nelson Mandela International Day, Madiba, as Mandela was affectionately known, called on the people of the world to honour him by helping their communities. The Nelson Mandela Foundation’s focus and messaging will be based on promoting community and home-based gardens, supporting fruit and indigenous tree planting, and creating awareness of the intersections between food security and climate change. In 2022 we will be highlighting the plight of food security and climate change with the tagline, “Do what you can, with what you have, where you are.” 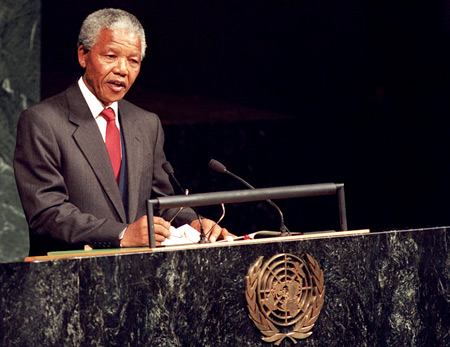 The world celebrates Nelson Mandela International Day every year to shine a light on the legacy of a man who changed the 20th century and helped shape the 21st. This is a moment for all to renew with the values that inspired Nelson Mandela. Absolute determination, a deep commitment to justice, human rights and fundamental freedoms along with a profound belief in the equality and dignity of every person on Earth.

He also called for a relentless engagement for dialogue and solidarity across all lines and divisions. Nelson Mandela was a great statesman who is perhaps unique in world history, though one cannot forget leaders such as Martin Luther King, who also fought against the oppression of Blacks and minorities.

Nelson Mandela was the greatest symbol of humanity in modern times. His story is inspirational on multiple levels. Mandela was the nation’s first black president. He founded the armed wing of the African National Congress and resisted the system of apartheid in South Africa.

For his activities with this group, he was convicted of conspiracy to overthrow the South African government and sentenced to life in prison. He spent 27 years behind bars.

Mandela was embraced as a freedom fighter by blacks worldwide yet deemed a terrorist by white South Africans. Even in prison, his fight to end South Africa’s apartheid regime made him the most dangerous and feared man in the nation. During his incarceration, it was illegal for people to even discuss his name.

Mandela fought tirelessly to end this inhumane system of governance based on rigid racial segregation and discrimination. After he was released from prison, Mandela became the president of his nation in 1994. He ushered in a peaceful, democratic and non-racial government. As president, his greatest achievement was his commitment to reconciliation. In his inauguration speech, he told his black and white countrymen: “The time for the healing of the wounds has come. The moment to bridge the chasms that divide us has come. The time to build is upon us.”

The 2009 biographical sports drama “Invictus” captures the essence of Mandela’s conciliatory spirit. The film tells the story of Mandela’s leadership before and during the 1995 Rugby World Cup, which was hosted in South Africa after the country had dismantled apartheid. This episode in South African history is more about how Mandela used his charisma and personal touch to inspire blacks and whites to unite, than it was about the Springboks winning the World Cup.

Mandela taught us that the three most important concepts we should embrace are love, humility and forgiveness — and the convergence of these ideals leads to reconciliation. His life embodied these principles.

Mandela’s message to his citizens should be the same message that other world leaders should be giving to theirs: “Our daily deeds as ordinary South Africans must produce an actual South African reality that will reinforce humanity’s belief in justice, strengthen its confidence in the nobility of the human soul and sustain all our hopes for a glorious life for all.”

A better man, not a bitter man

There are dynamic lessons from Nelson Mandela’s life. For those incarcerated, understand that Mandela spent 27 years in a small cell and came out a better man, not a bitter man. You still have the potential to be great. Mandela’s lesson for educators is to not give up on the poor children who are rebellious. He inspired Governments to work to transform the rebels without a cause into rebels with a cause. Mandela’s lesson for youth is to live with purpose and determination. His spirit was never broken — even after 27 years in prison.

He was a champion of the South African concept of Ubuntu, “I am because we are,”. Ubuntu is brotherhood, sisterhood, community — Mandela breathed and lived this concept. South Africa lost its favorite son and the father of the nation. When Mandela died, the world lost a shining symbol of selfless leadership.

In times of turbulence, Nelson Mandela shows us the power of resisting oppression, of justice over inequality, of dignity over humiliation, of forgiveness over hatred. As the world takes forward the 2030 Agenda for Sustainable Development and strives to overcome new sources of adversity, let us recall the lessons of Nelson Mandela’s life, and the essential humanism that guided him: “To be free is not merely to cast off one’s chains, but to live in a way that respects and enhances the freedom of others.”

There are many lessons that we in Sri Lanka can from the life and times of this great leader. He appointed a Truth and Reconciliation Commission (TRC) to probe how and why South Africa descended into conflict and discord based on skin colour. He was instrumental in getting a new National Anthem composed for South Africa. Despite the fact that the country’s Afrikaans leaders held him in jail for 27 years, he had no bitterness in his heart towards the Whites and in fact, requested the writers of the Anthem to specifically include verses in Afrikaans. Mandela sang these very words with his hand on his heart, symbolizing a new era for South Africa.

When the Security Forces won the war in Sri Lanka in 2009, incidentally the year in which the Mandela Day was declared, many people in Sri Lanka called for a “Mandela Moment” – an opportunity to heal the wounds of discord and rancour. Although the two conflicts are not entirely similar, the one in Sri Lanka too was based on ethnic ideologies promoted by politicians on both sides of the divide.

Unfortunately, the Sri Lankan leadership at that time missed this golden opportunity completely, thriving instead on triumphalism and nationalism, hurting the sentiments of the minority communities. They acted as if the Forces had conquered another country, whereas it was our own misguided youth who had been defeated on the battlefield. As always, peace is harder to win than war. 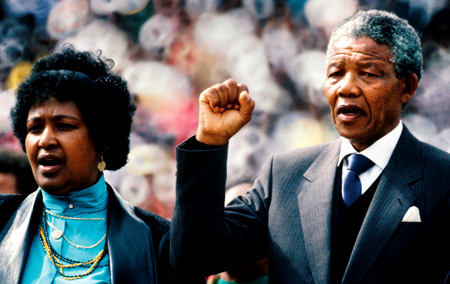 They missed the chance to bring the Nation together and forge a truly Sri Lankan identity. Instead, they aggravated ethnic tensions by their myopic actions.

They did not even permit the Tamil community to sing the National Anthem in Tamil, (which is a word-to-word translation of the Sinhala original) which would have given them a sense of belonging to the Motherland. Contrast this with what Mandela did, and one can see why Sri Lanka has failed to properly address the ethnic issue.

Much later, under pressure from the International Community, the Sri Lankan Government did appoint a Lessons Learnt and Reconciliation Commission (LLRC), but subsequent Governments did not have the heart and the will to implement many of its bold recommendations that would have alleviated some concerns of the International Community and all the citizens of Sri Lanka affected by the war. Nevertheless, some of its ideas such as the Office of Missing Persons (OMP) and Office of Reparations (OR) were set up rather belatedly.

However, it is still not too late to appoint a full-fledged TRC based on the South African model. We must come to terms with the past to secure a brighter future. We have to correct the mistakes made in the past to unite as one nation, one people. That is the most important lesson that we as a Nation can learn from the life and leadership style of Nelson Mandela, who always had a soft spot in his heart for Sri Lanka. Sri Lankan leaders and people in turn held him in the highest regard.

“To deny people their human rights is to challenge their very humanity. To impose on them, a wretched life of hunger and deprivation is to dehumanize them.”
Nelson Mandela