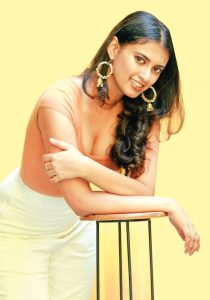 Young Devangi Wickremasinghe a beauty who turns eyes wherever she goes is fair possessing a slim tall figure, radiant hair with glowing eyes. But with Devangi it is beauty and brains both combined. Devangi in school too has had focus on IT.At present, she has already completed a Bachelor of Information and Communication Technology Degree( BICT), which was  a gruelling IT course on Cyber Security, minoring and networking at the Western Sydney University ,Australia, After four years she had returned home delayed after travel restrictions owing to Covid-19 epidemic. She hopes to return to Sydney to pursue studies, for her Masters in the same field.She is the eldest child of King of Choreography Chandana Wickremasinghe who is in par with Sri Lanka’s choreographic stalwarts Channa Wijewardena and Ravibandu Vidyapathy as leaders in dance. ,Devangi ‘s mother is Dilhani  a former sub editor at the Dinamina newspaper, while her two younger twin brothers Thanuga and Manuga  nine years her junior excel in sports and academics. As Devangi the two brothers are students at the Lyceum International school in Panadura.Father Chandana had quipped that for the trio dancing only could only be a pastime with no prospects of taking over the activities of his established Dance Guild, in Moratuwa.To learn dancing according to Maestro father Chandana to learn one should have talent, commitment and rhythm..Devangi has confessed that though she has inherited affiliations to father’s ability and profession she had not learnt serious lessons from him.She added that it may have been in total not more than two years she had been involved with activities of the dance guild. She had learnt dancing which is in her system though possess via hereditary affiliations, from her teachers at the Lyceum International school Panadura during her tenure in school..

To be precise on the 10th of April 2022 Chandana Wickremasinghe and daughter Devangi duo on invitation of Rangana de Silva the presenter of “Hitha Illana Tharu “participated in the Swarnavahini television program. At the time the duo was introduced Chandana added that he was at a loss to understand how she would perform.Devangi did surprise father by performing three dance items two solos and one with the father.The site to view a father and daughter performing a dance act without prior rehearsal was phenomenal. Devinga looked a peach dressed appropriately .Devango possesses a superb unbelievable high sense of humour added to her natural beauty.. She is slim  five foot seven inches tall very fair looks a potential film actress. Chandana endorsed the comment made by the host about her future as a film star. .All viewers would bless her a prosperous future..

Devangi when young has had the freedom to mix with her wide circle of friends also to participate in fun pleasurable events.But she was within the trajectory of parents  who guardian her to and back from events. Even during her schooldays if her parents were unable to pick her up her grandmother would do so which guaranteed her safety. Unlike some youngsters of today, Devangi realises the value of her parents’ rules and regulations and respects them. The same applies to her in Australia where she is under the guardianship of her paternal uncle  Hasitha Wickremasinghe, where the same rules have to be followed and observed.

About her passion connected to IT focus from school days she is fascinated by the vastness and diversity of cyber security and networking. They are also areas which get updated daily with new features and additions. “Cyber hacking is an international problem affecting many. Even individuals are at risk as shown by the many cases of ‘hacking’ which come to light often. Much needs to be done to make cyberspace safe which she likes to subsidize to it in her small way.

Devangi had confessed about the amenities accessible for studying as they are very much up-to-date and that the university environment was pleasing. Many Sri Lankan youth dream of greener pastures abroad but Devangi finds Sri Lanka more exciting than Sydney.In Sri Lanka compared there are more things to do – in Sydney, it is University, back home , study, sleep and go back to campus in the morning. Weekends for her are also mostly stay – at – home days. Outings with friends or going to the movies are very limited. As at date Devangi is at the tail end of her vacation and getting ready to take wing to Sydney.She comes home for every vacation. She had spent this vacation Devangi had been fully involved with the organization of Salamba 3, her father’s concert held at the BMICH on February 3. It was a massive issue with about 30 dance items with many dancers. Devangi herself presented a fusion dance as a surprise item, which she practised for just two days only as added she hereditary affiliations to dancing acts.. Most of the time she is at the dance studio down her lane helping out, practising, or just watching the dancers. She also hangs out with friends and does things with them while falling in line with parental rules.

Devangi dances only as a hobby. She is not a full time, professional dancer as she had not been here for the past four years for most part of the year. She does dance with fathers’  troupe whenever an opportunity arises. She has gone on tour to several countries including Australia, India, Jordan and Singapore mostly after she completed her ordinary levels. Devangi is an exponent of traditional Kandyan and Low country dances. She is also very creative by nature and loves to work with her hands and does much crafting including drawing and designing special clothes which she needs to wear for special occasions. However, her passion is for movies, especially, Bollywood. Her idols change from time to time , current favourites being Priyanka Chopra and Ranvir Singh.She eats everything but her exercise is continuous which she considers important..

A Buddhist by birth she respects all religions due to her upbringing. In her home they have the Bible and the Holy Quran and statues of Hindu gods too..