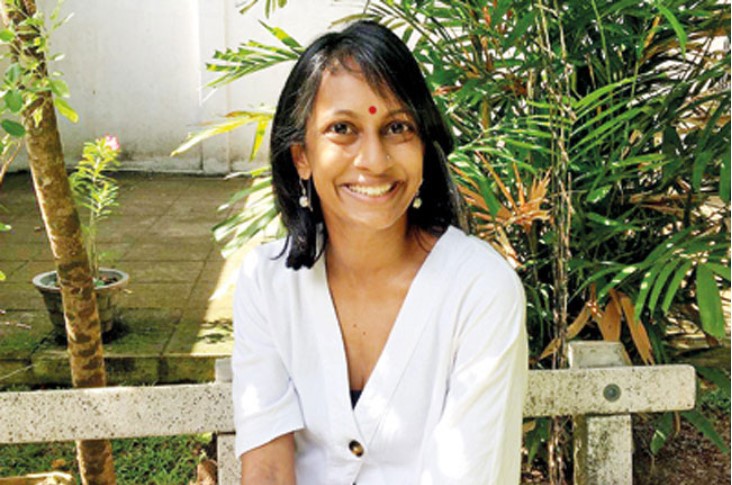 In this time of gloom and doom, bequeathed us by capricious and unrelenting Nature and the shortsighted obstinacy of our highest leaders, it is so good and such a relief to the spirits to read and pass on good news. We have failed dismally at the Olympics but that is no matter since the Olympics is designed for playing the game fair, not just to win but to foster fellow feeling among sportspersons and athletes from over 200 countries. So we congratulate our contestants for reaching Olympic entry standards and participating in the 2020 Games. (It looks again from news snippets that others journeying to Tokya, together with MPs and Ministers outnumbered our athletes!!)

However, we have two outstanding persons in creative writing, one an outright winner and the other, one among thirteen short listed writers to crow over.

Kanya D ‘Almeida won the 2020 Commonwealth Short Story Prize for Asia for her entry ‘I cleaned the …’ The judges termed it “a life affirming story of love among the rambutan and clove tress of Sri Lanka for a baby not one’s own and love for a high spirited elderly woman.”

Kanya is a fiction writer living in Sri Lanka who got her MFA from Columbia University and is now host of a podcast exploring birth and motherhood. She is soon to publish a collection of short stories.

The Commonwealth Prize is awarded the best unpublished short story and is divided into five sections; covers 54 countries; has been active for 10 years and offers high monetary prizes. The announced winners a couple of months ago, in addition to Kanya (Asia) were:

‘The disappearance of Mumma Del’

I dare to comment on her short story while congratulating her for winning over so many Asian writers. To me her short story had too much detail of soiled baby nappies with different types of infant stools graphically described as blood-mixed etc. I am not squeamish, but felt the detailing was overly done.

I also objected to her frequent use of the word ‘relations’ when she meant relatives. Relations are interpersonal/ international connections, while if connected by blood, i.e. of an extended family, then the word ‘relatives’ must be used. This may be hair splitting.

A stronger objection of mine was that she described very unlikely Sri Lankan situations, even giving an incorrect picture of our social norms. The caregiver clings to the coffin of the handicapped now grown child, not allowing it to be removed for burial, with a crowd of mourners present. Would this really happen? Also she is left mourning in Kanatta with all leaving the place after the funeral. Left deserted, she is rescued by Roman Catholic nuns. Will a woman ever be left alone in a cemetery in Sri Lanka? At least for prestige sake/ loss of face, the couple who neglected their child would have taken the mourning caregiver away from Kanatta.

A friend who is a sharp critic said she loved the story and thought it was marvelously written. Yes the narration was planned and carried through very well, as flashbacks.

Anuk Arudpragasam has been long listed for the Booker Prize for 2021. This is a resounding achievement since the Booker is undoubtedly the most prestigious prize for creative writing, like the Pulitzer of America.

The Booker Prize is awarded each year to the best novel written in English and published in Britain or Ireland. It was open to American writers a couple of years ago, albeit protested. This year, four of the nominated writers are American.

The judges – novelist Chigozie Obioma and Rowan Williams, former Archbishop of Canterbury, led by historian Maya Jasanoff – will now reread the 13 books before cutting them down to a six-strong shortlist to be announced on Sept. 14. The winner is to be announced at a ceremony in London on November 3, and will receive a prize of 50,000 pounds, (about $69,000). I quote their comment: “The long-listed novels are notable for their diversity in topic and tone. Several have a focus on race and have important things to say about the nature of community from the secluded to cyberspace.”

Thus Anuk faces tough competition. I have written an article in this column about Kazuo Ishiguro, detailing three of his books: ‘The Remains of the Day’ – 1989, for which he won the Man Booker; ‘Never Let Me Go’- 2005, frighteningly about cloned human organ donators; and his latest ‘Klara … ‘ – 2020, about a robot nursemaid hired by a handicapped child.

Anuk Arudpragasam is of course a Sri Lankan Tamil novelist, writing both in English and Tamil with a first novel, also about Jaffna and the aftermath of civil war ‘Story of a Brief Marriage’ – 2016. Published by Macmillan it was translated to French, German, Czech, Mandarin, Dutch and Italian. More noteworthy is the fact that this, his first novel won the DSC Prize for South Asia and another award while being short listed for yet another. He is thus undoubtedly a novelist/writer to reckon with, already recognized worldwide with the Booker selection.

Born in Colombo in 1988, he moved with his parents to the US when he was 18 years old. He read for his first degrees at Stanford University and then moved to New York for his PhD at Columbia University.

I enquired from a Vijita Yapa bookshop whether they had ‘A Passage North’. Not yet, the manager replied. However, the book will be beyond my means as he said it may cost around Rs 3,000. I quote and extract from an article by Tara K Menon – Asst Prof of English at Harvard University, which appeared in the New York Times Book Review on July 13.

His first novel, ‘The Story of a Brief Marriage’ which Menon terms “mesmerizing debut” is a narration of a single day in the life of Dinesh, a displaced Tamil living in a refugee camp.

‘A Passage North’ is centred on the death of Rani, the protagonist Krishan’s grandmother’s former caregiver, from hearing of her death and going to Jaffna from Colombo and the burning of her funeral pyre. As Menon says: “The intensely introspective pages in between recount Krishnan’s thoughts and memories … Rani’s village, once controlled by the Tamil Tigers and still reeling from a decades-long civil war. Rani who died suddenly and possibly by suicide was irretrievably traumatized by the loss of both her sons..” the first an LTTE soldier and the other -12 years – killed by shrapnel on the penultimate day of the war.

Menon writes “Anuk captures Krishan’s sensitive, roving intelligence as he meditates on the conflict from its idealistic beginnings, when insurgents dreamed of an independent Tamil state, to its ‘unimaginable violence; and irreparable psychological damage.’ The bombs may have stopped, the capital may be thriving, but for those in the country’s ethnic minority, recovery can only be ‘partial and ambiguous.’ … a political novel, unequivocal in its condemnation of the many atrocities committed by the Sri Lankan government on its Tamil civilians, but is also a searching work of philosophy… He poses essential, existential questions about how we should live in a world with so much suffering. Arudpragasam makes numerous sweeping, universal statements about the human condition….” ” …Full of melancholy, but takes love and desire as seriously as it does grief and loss.”

Personally I think many expatriate writers have made much on the state of acclimatizing themselves to migration and living in new societies and surroundings. More of our writers have taken the civil war as their subject matter and it must be boldly said that if the writer is Tamil, invariably he is subjective and prejudiced and faults the Sri Lankan government wholesale. We regret this. But if a novel is worthy for other reasons like alternate themes of the human condition, philosophy of life, love and fellow feeling, for instance, we have to judge its worth – unprejudiced ourselves. The bookshop manager I spoke to had this opinion: “You know the novel must be against the Sinhalese more than even the government.” I don’t fault him for his view.