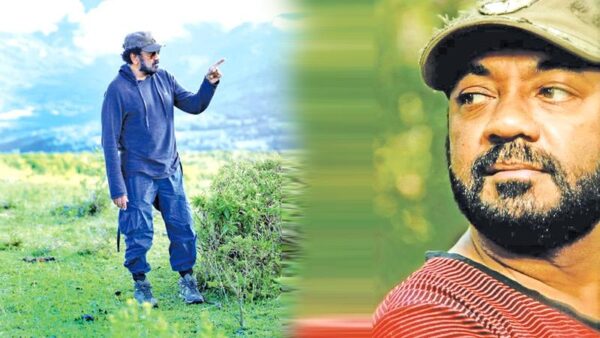 ” If you love the butterfly , don’t hate the caterpillar.”

These lines would awaken your memory of a teleplay in which renowned actor Jackson Anthony played the title role Appachchi – a man with a well built body ,clad in sleeveless shirts who always teaches her daughters to live according to the conscience and moral values. For better or worse, he forgets that the reality in the society is weird , bizarre and far different from his sane society, which leads to the conflict. 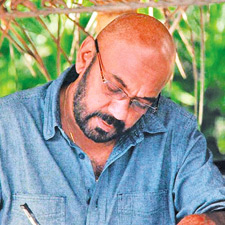 Significantly, acting and background music which had come in unison made the teleplay worth-watching. It is significant to mention that veteran actor Jackson Anthony won the award for the Best Actor for his role Appachchi at the Raigam Tele Awards.

Recently, as if through an error of destiny, our much loved actor met with an accident. He was transferred to the Colombo National Hospital where he underwent a seven-hour- surgery.

According to hospital sources , two bones of his neck has been dislocated and its membranes and both lungs have been damaged. Today’s article is about this colossus Jackson Anthony who stamped his indelible icon in the silver screen and the small screen by winning the Best Actor Award more than twenty times at awards ceremonies such as Presidential Awards, OCIC Awards and Sarasavi Awards.

Encyclopaedic, multi-talented, Jackson Anthony has proved his creative spirit through whatever he did and does. No doubt that in the past it was so, in the future it will be so.

Jackson whose wide range of portraying characters has reached unattainable heights , always gives his best for both small screen and silver screen. He entered the film industry in 1993 through his first film Guru Gedara which opened many paths for him. It would be correct to say that Jackson is a character actor who portrayed characters belonging to different dimensions and ranges.

What makes him stand out from others is that audiences do not see Jackson himself in any movies. The hunter (Sediris) whom we saw in Sooriya Arana is not seen in Dharmayuddaya where we can see a businessman (Harischarndra). Udayakantha in Gini Avi Saha Gini Keli cast Jackson as a notorious mob who is a different version of Lionel from Randiya Dahara.

Significantly, we could see his performances in many landmark creations such as Pathiraja’s Kadulla, Bandaranayake’s Bawa duka, Bawa karma and so on. In Kadulla which is a depiction of social changes taken place in mid 20th in old Ceylon, Jackson plays the role of Kurutheris- a man who has nothing to lose and nothing to gain. Audiences could see many faces through Jackson, thanks to the directors who have discerned his boundless thespian skills.

The most importantly, needless to emphasise that Jackson does not contribute to every creation. Nor did Jackson act in Mega Teledramas dished out from cheap themes. Nor did we hear his name from unprofessional programs. That is the unique identity that he has established in our film and teledrama fields.

Not only as an actor , we have seen this multifaceted artiste as a director too. His maiden teledrama direction came through Esala Kaluwara in 1992 and cinematic direction through Julietge Bhumukawa which went on to win the awards for the Most Promising Director at the Critic’s Awards Ceremony.

Later, he began to rule supreme in film and teledrama directions for years. Daskon telecast in 2014 is one good example for his versatility in teledrama direction. Aba revolving around prince Pandukabhaya can be viewed as an eye-opener for our movie buffs who were searching for a better cinema. His role of Nasi Watte Hitler in his cinematic creations titled ‘Address Na’ enabled him to win the award for the Best Actor at the Derana Film Awards.

“Read books not for examinations but for your life.” Taking the veteran artiste Premakeerthi’s precious advice to his heart, Jackson earned the encomium “Walking Library” for his extensive knowledge which he gained by researching into multiple subject areas.

Undoubtedly, already he has planted himself as a character-actor, announcer, television host, lyricist, film and teledrama director, newspaperman and historian.

Significantly, he is a visiting lecturer at the University of Kelaniya. Better known under his num de plum of Pana Puththra Kuhubu Peni , he made a name for himself as a newspaperman. On the other hand, it is Premakeerthi de Alvis who gave Jackson this pen name. Apart from that, songs penned by Jackson including ‘Sithe Susum Niwena Gayana’, ‘Desa Piya Gath kala Mata Mewenne Obe Ruwa’, ‘Lade ukula Uda’, ‘Re Tharakawo’, ‘Dewiyo Sithana Dewal’, and teledrama theme songs would bear ample testimony to his awakened lyricist. True that he is an instinctive artiste and performer. To be frank and honest, Jackson whom most veterans hail as Jacka is a national treasure.