When I travel around Sapporo, in Japan, I keep an alert eye for English wording that appear on shop signs because they often make no sense. The syntax and semantics are intriguing, but they do provide me a with few delightful minutes of speculation, wondering what on earth they mean. My favorite is “Freaky Wardrobe Coffee”. Now, I ask myself, why is the wardrobe freaky? Is the wardrobe in the coffee shop? Does the shop sell coffee or wardrobes and coffee? Finally, dying with curiosity, I went there one day, and, passing a sign that asked “Are you freaky?”, found it to be a retro 1960s place, which served average coffee but overpriced coffee, where young women came to linger and take photos of the displayed artifacts. The manager could not explain how they came upon the name. Perhaps to sound “cool”?

Once, a friend’s elderly father was being transferred to a rehabilitation hospital, and I rode with him in the ambulance. As usual, my eagle eye was on the shop signs, and we passed one that said POL KIRI. Did I really get that right? Was it something Japanese, or Sinhalese?

So, curious as ever, we stopped there on our way home. Indeed, it served Sri Lankan chicken curry with rice, and, of course, POL KIRI on the sign meant coconut milk. I expected to find a Sri Lankan running the place and was surprised to be greeted by a Japanese woman, Yoshiko. It was a tiny unpretentious place, with the numerous handwritten signs and sketches that adorn such eating places and bars in Japan. They are run by the owners themselves, who cook, serve, and clean-up. They usually have a small but regular, loyal clientele.

I saw a roughly sketched map of Sri Lanka on the wall, where Nuwara Eliya was shown in the deep south where Hambantota is! Yoshiko was delighted to know I was Sri Lankan, and, with my friend translating, the POL KIRI story unraveled. Her husband, 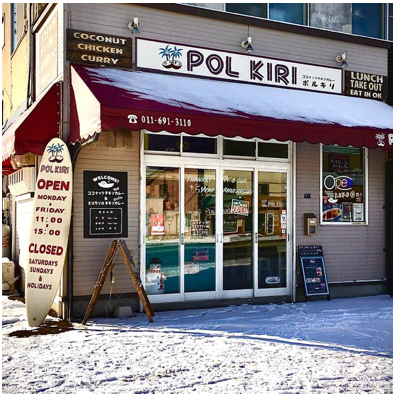 while working in New York, had befriended a Sri Lankan, who later visited Sapporo and taught them to cook a few Sri Lankan dishes. From that was born the idea of opening a place serving Sri Lankan curry, which of course needed pol kiri.

Let me digress here and describe what “curry” means in Japan. The sauce or gravy is made of basic Indian spices, made thicker by the addition of flour, and served with potatoes, onions, carrots and meat.  Coconut milk is not an ingredient. Curry restaurants and “soup curry” places are ubiquitous in Japan and are quite popular, especially in winter. So, POL KIRI was special: it served curry in the Sri Lankan style, with coconut milk.

The menu had only three items, Sri Lankan chicken curry (very spicy) and coconut chicken curry, both served with sticky Japanese rice, and coconut flavored ice cream served in a coconut shell. I learned that Yoshiko’s husband had a full time job and was also a musician, but helped with the cooking. The day to day running of the place was in her hands, and she opened POL KIRI for lunch five days a week, Monday through Friday, and also for dinner on Friday. On my first and later visits (I did not go often because it was a 40-minute drive from my place), I did not see more than two or three customers at a time.

Obviously, POL KIRI did not serve a large clientele but it had lasted five years. They bought the canned coconut milk online from Amazon, and spices were sent from Sri Lanka by their friend. They had never been to Sri Lanka; the erroneous map was an obvious clue.  (I later gave them a detailed road map of Sri Lanka, which has replaced the previous “map’ on the wall.)

On subsequent visits, Yoshiko’s smiling welcome on seeing me was obvious; perhaps she was happy that an actual Sri Lankan enjoyed her curries. She had a childlike quality which was charming; when I took a Sri Lankan dancer as a gift, she asked me for a name. I said Chandra. When a tiny wooden elephant was gifted, it was named Raja. Each time I walked in, she introduced me to other customers as a Sri Lankan; perhaps my visits authenticated her curries.

Takashi, her husband, is an interesting character. He had spent some time in the States, spoke good English, and played in a Bebop band, jazz being popular in Japan. I only saw him when I went for dinner on Fridays, and we chatted. Once, he proudly showed me a large cooking pot, empty, saying “Sold out”!

I was moved by these gentle, charming people. Here, in the remote northernmost island of Japan, where the people barely knew of Sri Lanka and which hardly any Sri Lankans visited, Yoshiko and Takashi were keeping a little bit of my culture and cuisine alive. So, I wondered what I could do for them, and the idea for a Sri Lankan Night was born. I would cook two curries, provide pappadam and basmati rice, all for no charge because I would be having fun. They loved the idea, and Takashi undertook to cook a few more Sri Lankan dishes. The guests would be limited to 15. We would have Sinhala music, and decided on the last Friday of the month, January 31.

I went home and ordered some items, such as parippu, basmati rice, and pappadam, on line. A few days later, on checking POL KIRI’s Facebook site, I saw that the Sri Lankan night was posted there, with the appearance of “Mr. George from Sri Lanka” noted, along with a neat sketch of the menu, done by Takashi. Would the readers think that Mr. George was a famous Sri Lankan chef? I could handle a few dishes, and had never cooked for more than 5 people. The night was going to be interesting, to say the least. 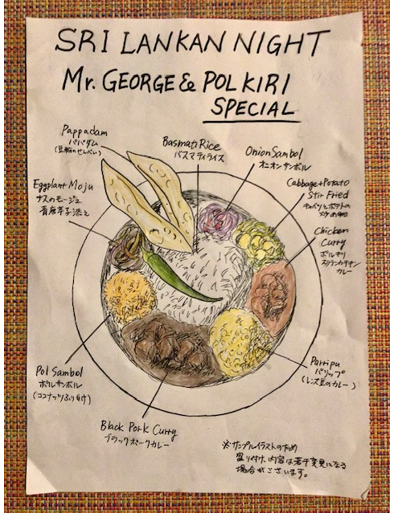 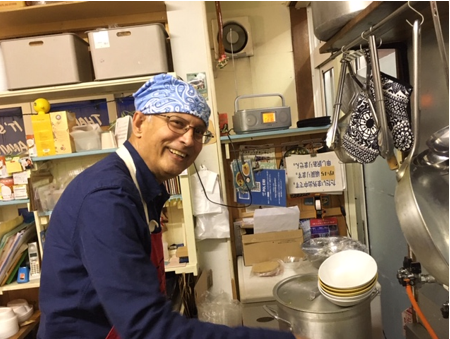 When the time arrived, I put on an apron, tied a bandana around my head in the style of a Japanese chef, and entered the small kitchen. Takashi has already finished his cooking. The guests began to arrive, two couple driving more than 100 kilometers roundtrip. Only one guest had been to Sri Lanka.

I had sprinkled maldive fish lavishly on the parippu and cabbage & potato dishes that I prepared, and they smelled good. Takashi surprised me with amazingly authentic black pork curry, brinjal moju, and pol sambol. He had polished his skills by watching YouTube on Sri Lankan cooking. On each serving, the long grained, snow-white, fluffy basmati rice was colorfully surrounded by the curries, including the usual chicken curry, pol sambol, and pappadam. So, while a soft snow fell outside, and Victor, Amaradeva, and Clarence played in the background, we had a memorable first Sri Lankan Night at POL KIRI. 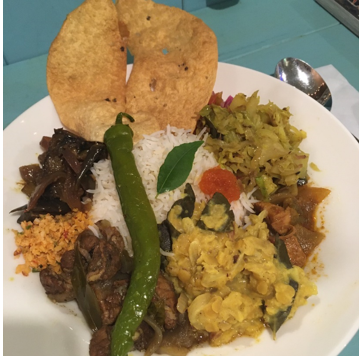