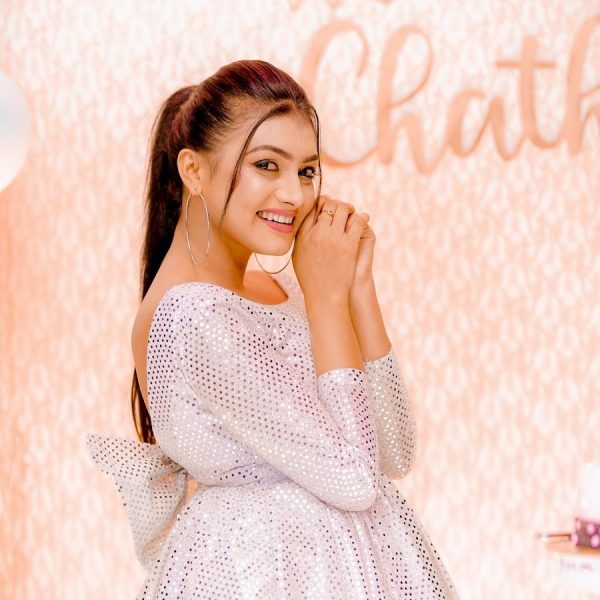 Chathu Rajapaksa had been brought up by her Punchi Amma as her mother was employed abroad for a number of years.Hence she had lamented to the media that she was bought up sans much affection.Chathu’s childhood dream had been adamant to become an actress one day.To date it has been approximately eight years having stormed into this field.She is now an acclaimed personality having dominated in many fields as an actress, model, TV Announcer presenting news for Sirasa, having a gorgeous inimitable voice perhaps hers is now a household name in Sri Lanka.Chathu was born in Badulla, educated at Nannapurawa College ,Monaragala, presently domiciled in Piliyandala.Her turning point was  when she dominated in the Sirasa Film Star reality contest where she bagged three awards for most beautiful actress,most fighting actress and the award for the first runner up.Here the voice, beauty,presenting ,modelling were tested in a gruelling contest.This made her to be selected as a news presenter at Sirasa for five years for her inimitable voice colour.In acting portrayals she remembers her personal life’s incidents which are etched in her memory.

Chathu came to limelight when she displayed her prowess in dance, acting, announcing, modelling in the Sirasa TV Film Star reality program to be recognised. Chathu is thankful to Buddhini Jayawardena for selecting her for the dual roles in Tele Drama ‘Bandana’ which she did with confidence.Chathu had asserted that she was very nervous to portray not one but dual roles in which she triumphed. Thereafter Chathu was elected to portray a main role in film ‘Patak Nethi Adarayak’ selected by Anura Jayawardena to whom she is very grateful for opening the accesses for her.Then more recently Chathu came to more fame when she acted in the film ‘The Game’ which is been shown in Sri Lanka. The role portrayed was as the younger sister of Ranjan Ramanayake.Chathu recollects this was a rare opportunity to act with the legend Ranjan Ramanayake as during her schooldays she was crazy about his acting.She is a self-taught actress perhaps with innate talent devoid of any hereditary affiliations. She had asserted one has to showcase one’s talent according to individual’s range and capacity.

In addition to her above triumphs Chathu had portrayed vivid roles in “Adaraye Gindara’. ‘Katu Pichcha’,”Aya’, “Salmal Aramaya”, ‘Gangana Piyawara’,and “Race two”.Chathu always endeavors to enhance her absolute sensitivity to portray inner finer emotions through her facial terminologies for her all roles.This is best proved in her portrayal in “Aya’ playing the lead role.Chathu had added that all typescripts are interrelated in one another as the failure of one would ruin the shot.

Chathu though known well as an actress but had undergone studies in modelling field but not taken part in any pageants.Chathu had quipped that though people have the freedom to criticize but does not endorse the criticizing in rude manner.She ignores the brick bats elements which are flown at her as she knows who she is.This she attributes, is done by weak jealous links.

Chathu believes in been optimistic appeals to all to be in that stand in the context that everything in the present world undergoes transformation, hence we all should adopt to subtle changes she added.Chathu has her own role models ,interested in Deepika Padukone and Korean Actresses.Chathu watches Korean films and Teles to be influenced by them. Chathu is indebted to her parents and husband for the continuous support rendered for her career which is still to blossom to unprecedented heights.