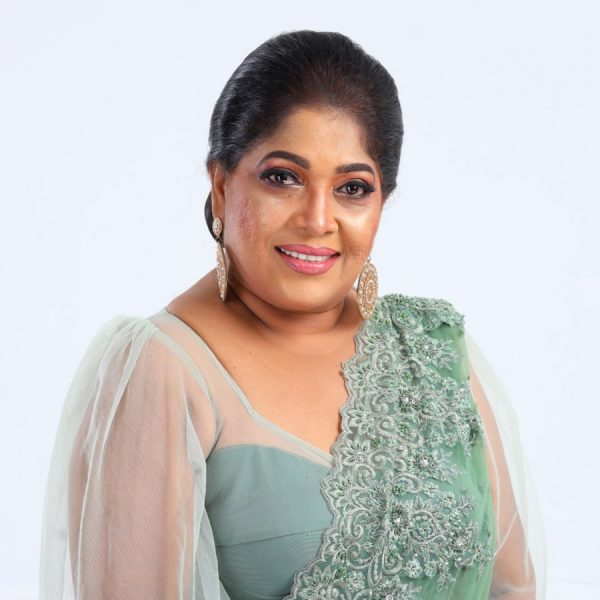 Chandralekha Perera is a prodigious vocalist who is devoted to her craft, who had worked  incredibly hard learning it at the Belwood music academy , a singer who was willing to sacrifice. For her to become an accomplished vocalist she had possessed the passion for the craft, voice care ,desire to improve, enunciation, time commitment, controlled breathing ,restraint and  her own inimitable signature style.Chandralekha had been able to invest the effort into a proper learning curve how to sing,practicing,warming up ,learning new skills to improve the innate skills and the stage presence, how to keep the audiences spellbound with pin drop silence. Chandralekha never allows her passion to diminish, loves singing not only to make it work but also it to be fantastic, It has been an effervescent journey for over four decades but she still sings in the same vein with vigor and charm.ove your experience. This includes personalizing content and adveI AGREE

Chandralekh Perera  was born n the 1st  December 1961, is the well renowned  Sri Lankan pop singer for over four decades born to a middle class family in Kurunegala.From her toddler time she had been singing frequently at home.In school she had taken part in singing competitions.While still a student she had been a vocalist in a band ‘Spring Time” based in Kurunegala.She had met future husband Rookantha Gunatilleke when the latter was invited by her band to be the keyboard player in year 1976,Befoir she got acquainted with Rookantha her father had submitted her name to the then popular government sponsored youth organnisation National Youth Services Centre( (NYSC) which is learnt was against her will.Chandralekha had been successful at the interview that was conducted by the youth centre authorities. During this time she had got the unique opportunity to appear in test broadcasting transmissions in the national television which was gearing to commence transmissions under the Sri  Lanka Rupavahini Corporation which was a gigantic gifer by the Japanese government.By sheer quirk Chandralekha was spotted by Film director and producer renowned DB Nihalsinghe.DB Nihalsinghe had selected Chadralekha for the television series “Rekha” which made her a star in year 1986.Apart from acting she had contributed four main songs in  “Rekha”  namely Del Wu Pahan. Hiru Hinehena. Wasanthaye Mal Samaye and Neela Nuwan Yuga.All lyrics were by Professor Sunil Ariyaratne and  music by legendary Rohana Weerasinghe.Chandralekha was adjudicated as the best actress in a subsequent teledrama  ‘Nadee Geethaya’ teledrama. In the same year Chandralekha portrayed a role for which she won the  best actress award.Then in the same year For DB Nihalsinghe’s film Yali Hamuwennai Chandralekha won the award for the best playback singer proving she possessed a ideal screen tone.With all these remarkable achievements  she was signed for LuX international by the prestigious Lever Brothers.

Chandralekha was therafter afforded the unique opportunity to duet with many popular singers and actors including popular film star and vocalist Vijata Kumaranatunga singing over a dozen songs.In years 1989 she tied the nuptial knot with Rookantha Gunatillake .The duo has two daughters Raini and Windy both are now renowned vocalists having inherited genetic hereditary affiliations from the parent duo also possessing innate aptitudes. In her previous marriage Chadralekha has a daughter and a son the former domiciled in Melbourne Australia while the latter in Milan Italy named Shyami Nadisha and Yohan Kumarage respectively.

In the year 2000, she and her husband were violently attacked by the Presidential Security Division (PSD) of President Chandrika Kumaratunga threatened with death if they performed at anti-government events. The attack sparked a protest by actor and film producer Dharmasiri Bandaranayake who too thereafter  received death threats. In the wake of these developments, Artists Against Violence (AAV) was founded. Ten officers of the PSD were arrested for the attacks given jail sentences in 2013, but Rookantha her husband and Chandralekha both handed in a letter to  President Mahinda Rajapaksa requesting him to give President’s pardon the wrongdoers as they were chosen to forgive them especially because the PSD officials who were arrested are mere workers of the previous President and punishing the innocent was not  intention of the duo as they had just carried out orders of the superiors.After the year 2000 the family was dejected migrated to USA and returned only after over a decade.

The exclusive concert of Rookantha and Chandralekha is ‘Ru Sanda Rae’ which means “Beauty Moon Night”. The first concert was staged at the Elphinston Theatre in Colombo, Sri Lanka in February 1993. To-date it has been staged in many places in Sri Lanka and around the globe including Italy, France, Denmark, Sweden, Germany, Australia, New Zealand, Canada, UK, USA, and the UAE. The ‘Ru Sanda Rae’ concert has been staged more than 300 times . In year 2012 too the “RuSanda Ras staged at the Sugathadasa Indoor stadium again to a packed audience, such a massive audience similar had not been seen at this venue the number was estimated to be over fifteen thousand fans who were thrilled by the performance of the duo.

Chandralekha has recorded many songs apart from the film and teledrama songs, most are in videos and MP3 discs.The initially sung songs in the early 1980’s are still hits. Some of these songs are Wana Sivupawan,Kiri Ammawarune,Neda Uyan Uga, Delwe Pahan, Kandulu Podak, Mal Nasarel, Senehasa Vidinata, Tharu Eliyada, Desa Thawama,Oba Depa Dowa, Me Palu Seetha Rathriye, Me Kathawa, Mata Mulu Lovema Obai, Roopa Swabhawata,Tharu Eliyen,Kandulu Podak Oba Desa etc the list goes on and on.The songs Delwe Pahan, Hiru Hinahena,Wasanthaye Mal Samaye and Neela Uyan Yuga all of Chandralekha’s songs are bears her signature which are definitely etched in gold in the hearts of all listeners.It is difficult to imagine that another Chandralekha Perera would be born in this century,All her fans would wish her good health and longevity to be in the music arena  for more decades.