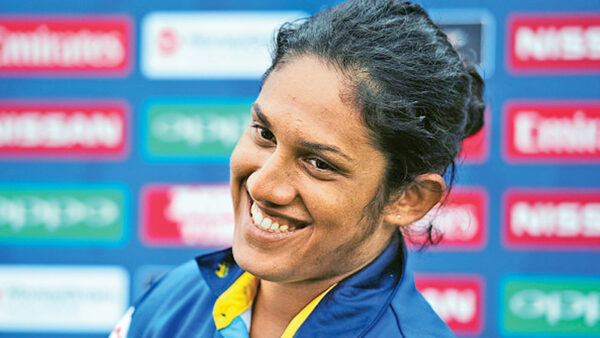 Sri Lanka’s women’s cricket captain Chamari Atapattu left the island to play for Perth Scorchers in the Women’s Big Bash League (WBBL). This will be the first time in 11 months that Atapattu will play competitive cricket after playing for Supernovas in the Women’s T20 Challenge organized by BCCI last year.She was the most successful batter in the Women’s T20 challenge (women’s IPL) having scored back to back half centuries as an opener.

The Sri Lankan skipper Atapptu has signed with the Perth Scorchers for the upcoming Australian Women’s Big Bash League (WBBL) 2021 and is expected to do well with her previous experience on Australian wickets. She has to undergo 14 day quarantine period in Adelaide before the WBBL and later expected to take part in practice sessions with her team.

The 31-year-old left-hander said that this is the first time that she is contracted with the Perth Scorchers, having earlier represented the Melbourne Renegades for two years. Australian wickets are always familiar for me In fact, two of the left-hander’s six international centuries have come on Australian soil; she smacked 113 from 66 balls in a T20 International at North Sydney Oval in 2019, following up with 103 in an ODI at Allan Border Field one week later.

She also showed a liking for the WACA grounds in Perth during last T20 world cup scoring a quick 38 ball half century against Australia.

Actually last year I received an invitation to play in the WBBL,but instead I decided to play in the women’s IPL in Sharjah. This time I am very happy to play for Perth Scorchers. All the leading women’s cricketers are involved in this WBBL which is the number one women’s franchise cricket tournament. Before this Australian tour Atapttu was with the National team under Bio Bubble for the National team practices under head coach Hashan Tillekaratne.

“Perth is like my second home; I have (family and friends) who live in Perth. I have good memories in Australia. I love the conditions and playing against Australian bowlers; there’s good pace and bounce,” she said.

The competition features eight city-based franchises, branded identically to the franchises in the Men’s Big Bash League. I think this is a good opportunity for me to gain more experience,” she added. Especially before the world cup qualifying tournament this will be good opportunity to come back into my usual form.

T-20 world cup is scheduled to be played in New Zealand next year and playing on Australian wickets is always good to adjust to the conditions which is similar to New Zealand conditions.

That’s good for me before the ICC World Cup Qualifying Tournament in December. The WBBL is the biggest franchise-based T20 competition in the Women’s game,” Atapattu emphasised.

The first game of Perth Scorches team will be held on October 17 against Brisbane Heat and before this Atapattu has a good chance to prepare for this tournament with good practice sessions . Perth Scorches head coach Shelly Nitschke said Atapttu is an undeniable match winner and has the ability to take the game away from the opposition quickly.

Atapattu is Sri Lanka’s first Woman cricketer to play franchise league cricket, having turned out for the Yorkshire Diamonds and Loughborough Lightning in the second edition of the Kia Super League in England in 2017. I like to see our youngsters to play franchise cricket like WBBL and its good opportunity to build up their talents .We have good young players with our National pool and they have to get more exposure to build up their skills added Atapattu.