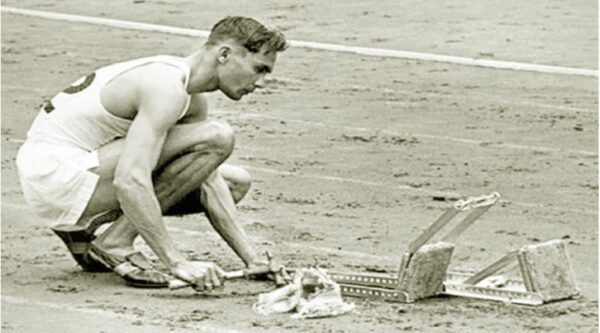 Thanks to a satellite in the firmament, the Moscow Olympiad is now viewed in armchair comfort even in the middle-class homes of Sri Lanka. There was a time when admirers of the culture and games of Ancient Greece had to be satisfied with taking Homer to bed and dreaming of Helen of Troy or Ulysses till the crack of dawn. T.V. and other Olympics have changed all that. Owing to their possession of an enormous vocabulary the Greeks had a word for everything and a name for every game under the sun.

In the field of athletics, however, they excelled to such an extent that it was the secret ambition of every young man to look like a Greek God. All the classical deities were supposed to be physically perfect with a chiselled grin or grizzled chin according to the specifications of the patrons of the Arts. When sculptors finished making a statue of one of the gods, everybody started admiring it. Ultimately they had to add a fig leaf, in order to prevent what is known as “as vaha” or “evil eye” from having a malefic influence on his work.

All the specimens of physical perfection that Ancient Greece nurtured were given an airing at the Olympic Games whose origins are lost in the mists of antiquity. But if Classical scholars like Ronnie Abayasekara and Lester Fonseka are to be believed, the first Olympiad was held in Athens in 776 BC and consisted of a race run over the length of the stadium.

After that it was held every four years until 393 AD according to the historians. The important thing is that the business of running with or without a torch was reckoned a man’s exclusive sport and here is something that the modern suffragette can take up with the ancient Greeks. Women were not allowed in the stadium either as competitors or spectators.

As the contestants had to concentrate 100 per cent on the events they were engaged in, they were not allowed the luxury of distractions. Hence, the Greeks in their wisdom, thought that females should remain at home while their husbands and brothers did the struggling to win the laurels.

Incidentally, the prize in the olden days was a branch of wild olive to adorn the brow. There were no medals. Even Nero, at a later date, had a try at acquiring some kind of laurel at the Olympic Games, though there were no items on the program suited to his own peculiar genius. Fiddling while a fire was on was not on the agenda.

I am somewhat allergic to dates but not to names, and all recorders of Olympiads will dip their flags and salute the memory of one man. He is Pierre de Coubertin, the gallant French nobleman who triumphed over every conceivable hurdle and breathed fresh life into the ashes of the Games that had lain dormant for nearly 1,500 years.

It happened in 1896. When the bugles blew in Athens once more to summon athletes from the four corners of the world to the stadium the dream of the idealistic French baron bore fruit. Since then almost every four years in different cities of the world the Olympic flag has flown, except during the time when the Great Wars were on. Then of course, runners were not heroes unless they ran in the right direction.

Without attempting to poach on the preserves of my esteemed friend M. M. Thawfeeq and the tribe of learned sports scribes of the calibre of Elmo Rodrigopulle, T. M. K. Samat, Lal Gunasekere, Rangi Akbar, Lawrence Machado and Vajira Goonewardene, I must be forgiven if I say that there are four years etched in the calendar of my Olympic memory. 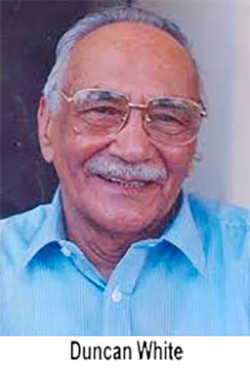 1924 in Paris belonged to Paavo Nurmi. The Flying Finn made dazzling runs in the 10,000 metres four years earlier and four years later, but in 1924 he was at the top of his form. In the course of six days he ran in seven long-distance races and breasted the tape ahead of his competitors in each of them. One afternoon in Paris he captured the 1,500 metres, followed just over an hour later by the 5,000 metres, in each case in new Olympic record times.

In the sizzling heat of this Parisian summer, Nurmi also won the 10,000 metres cross-country event, finishing nearly two minutes ahead of his fellow-Finn Ritola. In the course of his amazing career which spanned nearly a decade he won seven Olympic gold medals and three silvers. No man during this century has done more to put Finland on the map of the world.

1936 in Berlin will always belong to the black men. Jesse Owens, the shoe-shine boy from the cotton fields of America knocked the bottom out of the Nazi theory of racial supremacy, and gave Hitler a head-ache from which he never recovered. Owens won the 100 metres, 200 metres and Long Jump, setting up records every time. When he died last month experts described the great Negro as the Champion Athlete of the century.

1948 in Wembley was the year of the Dutch, while Emile Zatopek was the hero of Helsinki in 1952. Mrs. Fanny Blankers-Koen of the Netherlands was the outstanding personality in the London games in 1948, when for the first time a Dutch Burgher made Ceylon’s presence felt at an Olympiad in perhaps the most strenuous athletic event on the card.

The Dutch lady left her Anglo-Saxon sisters panting behind her in the 80 metres hurdles, the 100 metres and 200 metres. She also “anchored” the 400 metres relay team and gave the members of the local DBU the thrill of their lives because hitherto everybody thought the dames from Delft were built more for comfort than for speed.

Ceylon has good reason to remember 1948 and Wembley because at an age when most athletes hang up their spiked shoes and dream of the past, our own Duncan White built like a greyhound, secured a silver medal coming second only to the American world-beater, Roy Cochran, in the 400 metres hurdles.On that bright afternoon in the Wembley Stadium, Duncan White who 12 years earlier in 1936 was mainly responsible for winning the Tarbat Challenge Cup for his famous school, Trinity College, Kandy, went over the hurdles like a man possessed. He probably had the intuitive feeling that he was creating history, because his performance has not been surpassed by a local athlete. White was beaten by Cochran, but the stopwatches showed that both of them had broken the Olympic record.

It seems a pity that Duncan White, who brought so much glory to Ceylon, was compelled to seek fresh pastures far, far away from the land of his birth at a time when Sri Lanka needed men of his fibre and determination. There are some people who attribute Duncan White’s success to the inspiring presence of Willorage Hector Douglas Perera, an Uncle of Sri Lanka’s Air Force Chief, Harry Goonetilleke. My closest association with an Olympic personality was when I lived next door to the home of W. H. D. Perera at Chelsea Gardens in Kollupitiya.

Hector, as his friends called him was not an athlete but he had an arresting personality. Dark and handsome he had a flair for organization. He was, in many respects, said to be like Baron de Coubertin, the man who resuscitated the Olympic Games. As a young officer in the Port of Colombo he was one of the pioneers of the Carnival idea and his “Harbour Lights” netted a few lakhs for charity. Subsequently he went as the Manager of more than one Ceylon team to the Games.

W. H. D. Perera died about 14 years ago but his wife Maisie, is still an active office-bearer in the Women’s International Club while his daughter, Sondra Sriananda is a gifted pianist who can play Boogie-Woogie and Beethoven with equal ease.

Now that the Olympic Games are in full swing and those who put their cart before the horse are watching their TV sets with almost Spartan fortitude, it is nice to see the Lion Flag flying in the Moscow stadium though there may not be another Duncan White to bring a medal home.

(Excerpted from The Good At Their Best first published in 1980)