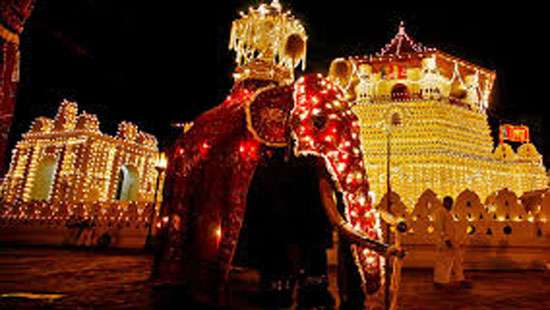 Well-known as one of the most revered tuskers in Sri Lanka, Nedungamuwe Vijaya Raja, the majestic “Maligawa Tusker”, popularly known as “Nedungamuwe Raja” who played a significant role as the Sacred Casket Bearer of the Temple of the Sacred Tooth Relic (Dalada Maligawa) passed away on March 7, 2022 morning at the age of 69 years due to natural causes.  The Tusker was provided a state funeral by the Government of Sri Lanka as he was considered a national treasure during his lifetime. The Tusker was named “Nedungamuwa Raja” as its owner was living in Nedungamuwa.

Nedungamuwe Raja was a highly respected tusker towering approximately 10.5 feet (3.2 meters) in height, the tallest tamed tusker in Sri Lanka. He had the privilege of carrying the Sacred Tooth Relics Casket (considered as a meritorious act by Buddhists) at the *Esala Perahera (procession) for over 10 years. His death is a shock to many Buddhist devotees and environmentalists. 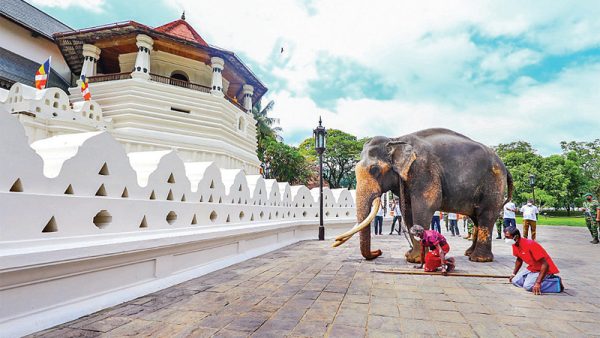 The Tusker was one of the most protected tuskers in Sri Lanka and the only animal that was provided with armed guard from a military unit deployed to clear a path for the animal when it navigated crowded roads during his journey from Nedungamuwa (a village situated in Weliweriya, Gampaha, approximately 35 kilometers from Colombo) to the Temple of the Sacred Tooth Relic in the hill capital Kandy. During the journey, he walked approximately 90 kilometers from Nedungamuwa, around 25 to 30 kilometers a day watched by over 1000 people during his journey to Kandy, the Tusker was a majestic sight…

There were two mahouts with Raja and Wilson Koddithuwakku (popularly known as “Kalu Mama” who looked after the Tusker for more than 15 years) was the chief mahout who had been looking after him from the day he was brought to Nedungamuwa Estate, the abode of the Ayurvedic Physician Dr. Dharmavijaya.

Born in 1953, in the stables of a maharajah in Mysore, India, Raja was one of two baby elephants gifted to a physician monk from Neelammahara Temple in Piliyandala, Sri Lanka. The physician monk had travelled to the Maharajah’s estates in India to heal the ailing aristocrat. The two young elephants were shipped to Sri Lanka and when the monk could no longer afford to keep the two animals, they were sold to Herbert Wickramasingha, a timber mill owner. Thus, Raja ended up at a timber factory shifting heavy logs and toiled hard. When the timber factory was bankrupt, the timber mill owner decided to sell Raja. 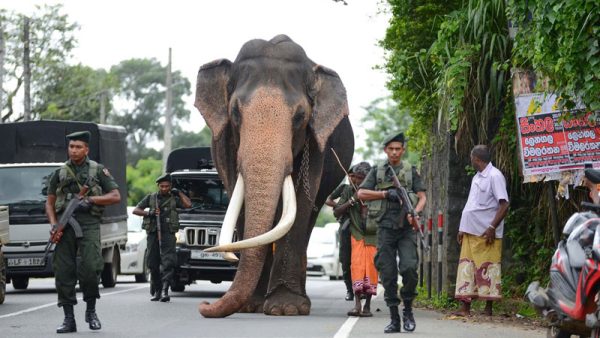 Dr. Dharmavijaya, the elderly native physician accompanied by his son observed Raja on his way to his bath and were awe-inspired and the encounter was a defining moment, considered as an auspicious encounter. Thus, in 1978, he moved to his new home in Nedungamuwa to lead a life befitting an elephant of such remarkable stature. Dr. Dharmavijaya observed that Raja belonged to the Saddhantha Kula also known as *Chaddantha Kula (one of ten castes of the Asian elephant, grouped according to their physical characteristics with a flat back suitable for carrying the Sacred Relic Casket and a pair of magnificent tusks as well as his dignified manners) and his tusks were extraordinarily long and crossed, a mark of distinction…

Senior Dr Dharmavijaya looked after the Tusker during his lifetime and when he passed away, his son, Dr Harsha Dharmavijaya, a native physician skilled in indigenous medicine for humans and elephants, inherited the animal. He too looked after Raja as a member of his family.

In 2005, Raja was assigned the duty of the “Maligawa Tusker” (the bearer of the casket of the Sacred Tooth Relic). His patience is legendary. Raja had been internationally acclaimed for his noble behavior and had been admired by Maligawa authorities, Buddhist Priests, Buddhists, local as well as foreign tourists.

On December 30, 2019, a Rs.15 postage stamp and a first day cover were issued in appreciation of the Tusker’s religious and cultural services. 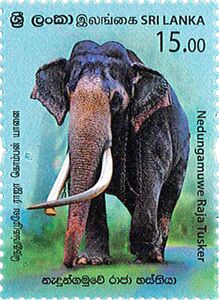