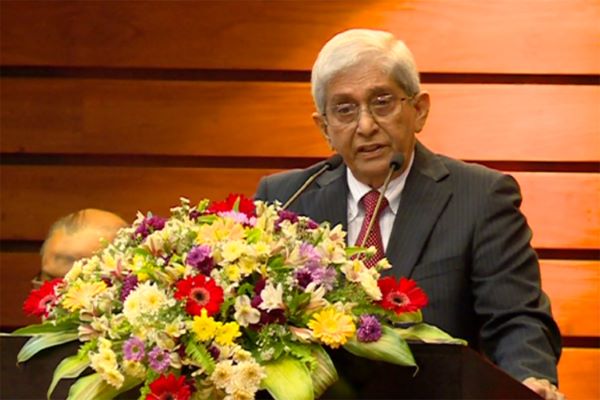 Over the past few days, concerns have been raised by various individuals and media about an assumed shortage of foreign currency liquidity in the domestic market, preventing banks from facilitating imports. Reports published or circulated by some media channels indicate seriously negative viewpoints which can be very harmful to the country. I wish to make the following statement to explain the true position about this subject.

Due to heavy foreign currency borrowings in the past several years, there was adverse speculation, even by the time of the formation of the present Government in 2019/2020, about Sri Lanka’s ability to service its debt service obligations falling due in the near term. In spite of such speculation, and amidst added pressures owing to the COVID-19 pandemic on particularly our tourism cash flows, the Government of Sri Lanka reiterated its stance of ensuring that all its external debt service obligations would be met on time, thus maintaining Sri Lanka’s unblemished record of servicing all its maturing obligations.

To enable the country to perform this formidable task amidst reduced foreign currency inflows, Sri Lanka introduced measures to rationalise selected non-essential imports. Some of these restrictions have been gradually removed, although the Central Bank is of the view that there is further space to curtail non-essential and non-urgent imports, given the continued challenges emanating from multiple waves of COVID-19.

As a result of the measures taken by the Government and the Central Bank in the past 1 ½ years, the Government has been able to substantially reduce its foreign debt to GDP ratio to about 40 per cent and the face value of foreign debt from USD 34.1 billion at end 2019 to USD 32.2 billion by end March 2021, while successfully meeting its maturing debt service obligations. I believe that it is in Sri Lanka’s best interest to address the longstanding merchandise trade gap of USD 10 billion as it places Sri Lanka in a vulnerable position, through careful policy action. While doing this, we would continue to meet our debt service obligations and avoid further damage to the country’s reputation and to investor confidence on the Sri Lankan economy and the financial system.

We have also observed that some segments of the Sri Lankan community motivated by political reasons have continued to fuel adverse speculation about the future path of the exchange rate and the ability of the Government to service its obligations. Such self-serving speculations are unwarranted and are harmful to the general public as well as to the business community themselves. These speculative comments have naturally created some unnecessary short-term imbalance in the foreign exchange market between inflows and outflows. However, it must be noted that the Government and the Central Bank has ensured that trade is not unduly disrupted, and intermediate and capital goods imports are given priority in the process of imports. Total import values have remained considerably high at a monthly average of USD 1.7 billion during March, April and May 2021. High import values in these months show that importers, particularly of essential goods, have not been overly inconvenienced as the published media reports claim.

What the Central Bank is doing now with the participation of all commercial banks, is judicious management of imports and foreign reserves. As cash flows are poised to improve in the next few months, the Central Bank will be evaluating the national balance sheet and external macroeconomic conditions in deciding the future policy response.

As an interim solution in managing the mismatch in cash flows, the Central Bank has been working closely with the banking sector to ensure that stability in the foreign exchange market is maintained. Regular meetings with key officials of the banking community are held by the Central Bank, and the banking community has mutually agreed to manage their outflows within inflows, while giving priority to essential and urgent imports, and discouraging orders of speculative nature. It is such prudent action by banks that is being blown out of proportion by parties with vested interests.

Actions taken by the banking community have been supported by the Central Bank of Sri Lanka through measures taken in relation to mandatory conversions of export proceeds and regulatory measures to dampen speculative activity. The Central Bank has enabled commercial banks and corporates to borrow foreign funds so that the banking system could remain non-reliant on the Official Reserves to finance imports, thus supporting the national effort to continue the process of debt servicing without disturbance.

At present, our focus is managing Sri Lanka’s debt service obligations. In this regard our Gross Official Reserves remain at USD 4 billion, without considering the standby SWAP agreement of approximately USD 1.5 billion with the People’s Bank of China. While there may be short term fluctuations in this level of foreign reserves in the period ahead due to debt servicing of the Government, adequate financing strategies have been lined up to maintain reserves at sufficient levels, through inflows to the country. These include non-debt inflows expected within a short period of time to the Government particularly through its new investment arm, and other inflows to the Government from multilateral and bilateral sources. Inflows expected to the Central Bank include the SWAP facility of USD 250 million from the Bangladesh Bank expected in July 2021, the SAARCFinance SWAP facility from the Reserve Bank of India of USD 400 million expected in August 2021, and the special SWAP facility of USD 1,000 million being negotiated with the Indian counterpart. These are in addition to the receipt of around US dollars 800 million under the IMF SDR allocation expected in August 2021, and the Central Bank purchases of export proceeds and worker remittances from the market, which would help the Central Bank to build Official Reserves through non-debt inflows of around USD 700 million annually in the period ahead. Measures are also being put in place to entice the resident holders of maturing Sri Lanka International Sovereign Bonds (ISB) to repatriate maturity proceeds. It may be noted that 30 per cent of upcoming ISB maturities are held by residents. Moreover, the banking sector and the corporate sector have also seen increased amounts of financial flows at concessionary rates to support real sector activity. Private sector entities are expected to raise funds from overseas counterparts making use of the recent easing of related foreign exchange regulations. Some of these inflows in the period ahead are expected to add to the Official Reserve as well. The recent enactment of the legislation on the Colombo Port City Commission will also enable increased non-debt foreign exchange inflows to the economy.

Overall, I wish to assure the media, the general public, the business community and the investor community that the conditions of foreign currency liquidity observed in the domestic market at present are temporary and are driven by excessive speculative activity. We request these operators in the market to remain calm and not fuel undue speculation, which is not in the national interest, as the careful management of the situation without undue disruption, will result in a beneficial outcome to the country as a whole.