Having passed the overgrown lush greenery along Siyabalanduwa to Lahugala on the A4 (Colombo-Batticaloa) Road, we suddenly glimpsed a strange landscape when we passed Sengamuwa. About 10 kilometres beyond Pottuvil, on the A4 Road, we saw a stretch of barren paddy field dotted with small houses and ubiquitous herds of goats and cattle lazily grazing. Most villagers plied the road on bicycle, a popular and cost-effective mode of transport, where fishing and farming are the mainstay.

As we entered the crowded Pottuvil town, mostly populated by Muslims, it reminded me of the swarming dens of Colombo’s slum dwellers. However, the haven of windsurfers, world famous Arugam Bay, lies on the Eastern boundary of Pottuvil. The white sand dunes stood out like immaculate rocks scattered along the sandy coast. For thousands of years, these mighty dunes have protected the land from progressive sea encroachment. Beneath these white sands, lies buried, the glorious past of our heritage. 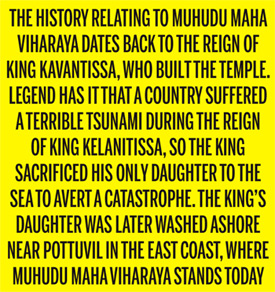 Our destination is Muhudu Maha Vihara in Arugam Bay at Pottuvil. It is the only Buddhist religious site we came across with the help of a villager on the Eastern seashore. From a distance, we saw the ruins of the site, juxtaposed with sand dunes. We seated ourselves under the shade of a mango tree for the impending meeting with the temple’s chief prelate. The blowing breeze across the Arugam Bay rejuvenated our bodies as we sought a short respite from the tiring and hectic eight-hour journey from Ratnapura.

East of Pottuvil, there lies an archaeological and historical site called Muhudu Maha Vihara, once venerated Buddhist place of worship in the Eastern Province. Its dagaba now buried amid the ruins. To its West are the remains of a pillared structure where the torso of a Buddha statue was found and later renovated by the Department of Archaeology in 1960s. The seashore sand covers much of the site where the dagaba lies, not yet excavated. Several stone pillars and broken bricks are visible from nearby. When this was uncovered, there emerged two beautiful life-size stone statues of Bodhisattva Avalokitesvara. This is now believed to be, perhaps, an ancient foundation which was later overlaid by Mahayanism.

Today, the Muhudu Maha Vihara faces the grave problem of losing its archaeological reserve status. The main reason for the ruination of this Buddhist site is perhaps the lack of a Sinhala population in the area and to a larger extent, the terrorism which engulfed the Eastern province during the battle against terrorism. Prior to escalating the battle, pilgrims from all over the island frequented this locale and donated money to renovate the Buddhist sites.

During the throes of the terrorist attack in the East, these bhikkhus hardly received alms. In those days, only the Security Forces who had been assigned to give security to the temple, shared their meals with the bhikkhus. But the situation has changed today as more pilgrims and visitors throng the site each day and bestow many donations to uplift the paltry condition of the places in the East. Today, a new Chaitya has been built at the sea shore of the temple premises with the help of devotees.

The survey plan of the temple reveals Muhudu Maha Vihara once possessed 264 acres on the coastal strip. A government gazette notification issued in 1965 states that the temple has been given 30 acres and is protected as an archaeological reserve. Unfortunately, the temple now possesses only three acres as the rest has been acquired by villagers. 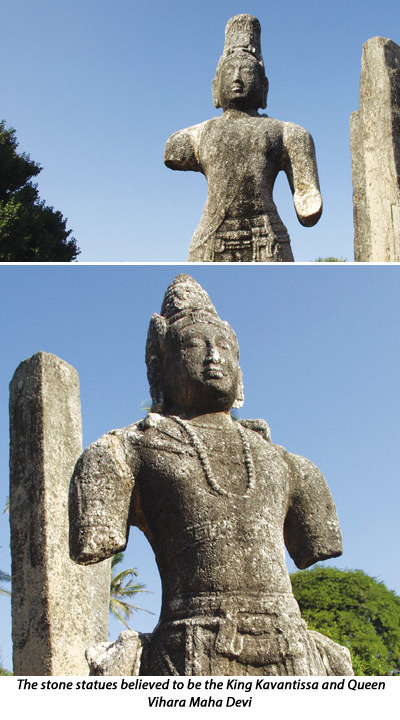 The history relating to Muhudu Maha Vihara dates back to the reign of King Kavantissa, who built the temple. Legend has it that a country suffered a terrible tsunami during the reign of King Kelanitissa, so the king sacrificed his only daughter to the sea to avert a catastrophe. The king’s daughter was later washed ashore near Pottuvil in the East coast, where Muhudu Maha Vihara stands today. Later, King Kavantissa who ruled Ruhuna, had met Vihara Maha Devi on this same shore and got married, and to commemorate this historical event, the Vihara was built at the Arugam Bay site.

The sand dunes absorb the mercilessly hot sunrays during the scorching midday heat. As we attempted to tread on the dunes, it was akin to walking on fire. Somehow, we visited the rest of the stone pillars and bricks buried beneath. It is believed that there are many ruins buried beneath the sea shore. The torso of a Buddha statue and two life-size stone statues that lie beside, believed to be Avalokitesvara or King Kavantissa and Queen Vihara Maha Devi, are easily visible to anybody. All these statues were restored by the Department of Archaeology decades ago.

Before restoration was carried out, all lay on the ground and were an easy target for vandals and unscrupulous treasure hunters. Muhudu Maha Vihara is historical evidence to a veritable Buddhist population that once inhabited the lands close to Pottuvil centuries ago and made the route to Anuradhapura from Magama via Pottuvil a very popular one.