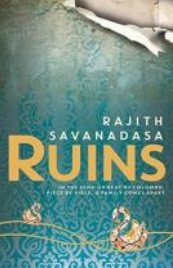 Ruins is loosely based on the Sandakada Pahana with its circular bands, one of which contains a procession of animals, each representing a stage of life: the elephant (birth), the bull (decay), the lion (disease) and the horse (death). In another band is the swan, representing discernment between good and evil. At the centre of these circles is the lotus, representing enlightenment.

Each character represents a symbol on the Sandakada Pahana. They are all discontented with their lives and yearning for more, each ontheir own journey from one state of being to the next.

Latha’s brother wants her to return to their village but what will she do there? Latha has been at Mano Mahaththaya and Lakshmi Nona’s since before Niranjan Baby was born and he is 23 now and wants to be called “mahaththaya” himself. She was 16 when she came to Herat household, which is how old Anoushka Baby is now.

Mano likes to think he’s a good husband, a good father, a good newspaper editor. He’s not sure why the people around him are unhappy. Mano wants the old Lakshmi back, the fun one. Burdened by having to keep the peace at home and at work, Mano turns to what his wife refers to as “fire water”, for a bit of relief.

Lakshmi tires to be a “good Tamil”, one that is acceptable to society, unproblematic and apolitical. “Ammi isn’t really Tamil”, says Niranjan, “she’s like one of us”. However, having kept a tight rein on her identity for decades is wearing Lakshmi down. When an overseas based acquaintance reaches out to Lakshmi to search for a missing Tamil boy, Lakshmi is faced with a dilemma.

Niranjan returns to his home country after a five year study stint in Australia. He wants to achieve things, make his mark, show them all up. He needs capital for his start-up and for his parents to leave him alone to get on with his life.

Anoushka is trying to hide her punk rock obsession because everyone already thinks she’s a bit different. The pressures of her impending O-Levels, her strained friendship with former best friend Natalie, feeling isolated,friendless, and stifled, Anoushka is reaching breaking point which culminates in a distressing incident that shakes the Herath household to its core. Based in 2009, during the last heady months of the civil war; the pastand the present, the old and the new collide unravelling secrets, fears, and desires. Ruins is about identity and of identity crisis. It is about finding oneself and reaching a state of being content in simply being.

Nimandra Gunasekera
Nimandra works in the oil and gas industry, enjoys reading and dabbling in a bit of writing