Akira Kurosawa, the celebrated Japanese filmmaker once declared: “human beings share the same common problems. A film can only be understood, if it depicts these properly”.

‘The Newspaper’, a Sri Lankan film, directed jointly by Sarath Kothalawala and Kumara Thirimadura, two-actor turned film directors bears testimony to the above statement. The film was produced by Minister Dr. Bandula Gunawardhana along with W. Premasiri and Ravindra Guruge. 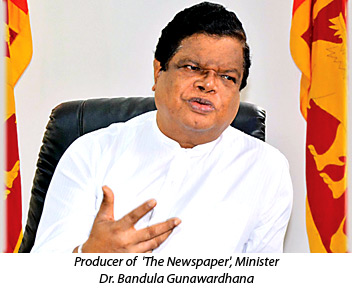 ‘The Newspaper’ is also the fourth award-winning film produced by Minister Dr. Bandula Gunawardhana. It won the award for the best direction at the 23rd Rainbow Film Festival London 2022, which was held across East London from May 29 to June 5, 2022. ‘The Newspaper’ has got a touching and grieving story. It employs an amazing set of characters. Every actor is an exception with a great bit of performance. Directors Kothalawala and Thirimadura are in lead roles while Pubudu Chathuranga, Gihan Fernando and Dharmapriya Dias playing the supportive roles.

The film is endued with the music composition of Gayathri Kemadasa. Edited by Rukmal Nirosh and cinematography by Chandana Jayasinha, it was released during the midst of the Covid-19 pandemic. The 23rd Rainbow Film Festival announced the year’s awards on June 5, 2022 at the Rich Mix Centre in Bethnal Green Road.

A “Film Corner” at the side hall of Brady Arts Centre was an interesting venue where film screening seminars and Q/A sessions were held. The event was flanked by professional filmmakers that included directors, editors, cameramen and film journalists while two other events, “one day film making” course and “women’s film conference” were also being held simultaneously.

“Mayar Jonial” (Debris of Desire), directed by Indrani Ray Chowdhury and produced by Jasim Ahmed was adjudicated the best film.

The plot of ‘The Newspaper’ derives through a rather sensitive story which is quite essentially and interestingly the heart of the film. The frankly amazing story flows through the movie magnificently connects the audience from the very beginning to its utter end.

The film in a nutshell is a story about a poverty-stricken small family living in the dry zone of Sri Lanka which is forced to get engulfed with a wave of miseries that they are not destined to undergo owing to an inaccurate news item, published in a national newspaper which stated that their son is part and parcel of a suicide bombing, carried out by the terrorists.

Consequently, the ill-fated family had to be at the dead-end of the anger and hatred of their fellow villages and eventually they were driven away from their native village. But, after almost a decade, the truth behind the wrong news report is revealed.

The film goes on depicting a resolute and steadfast friendship between two modest men who entrust themselves with the task of being on a journey to make a wrong into a right.

These two men, one made handicapped by the angry villagers following the hearing of the wrong news report and the other illiterate cattleman trudging a rigorous way, surrounded by a sea of difficulties into the city with the intention of making a suggestion for a correction be printed in the newspaper which had carried a false article that misinformed the reading public that their brother was involved in a suicide bombing attack.

“The Newspaper” is arguably the excitement of experiencing the new and the unexpected that immediately pulls the audience right into the film.

The film presents a unique and intriguing story where the audience is wonderfully exposed to the end even without knowing it until the very end of the film. The uniqueness in “The Newspaper” is the fact that the entire story tied in with the mysteriousness of the genre totally pushes the audience right deeper into the story, making the film rather fascinating and memorable.

“The Newspaper” highlights eternal values and timeless values. It has a general sense of being able to combine various elements within the film. The film does not end up with an ambiguity but with a strong complex tone.