Besides the UK, Charles III is also King of Canada, Australia and NZ — how? – By Explained Desk

These three countries are part of the Commonwealth realm, a group of 14 countries that recognise the British monarch as their head of state. 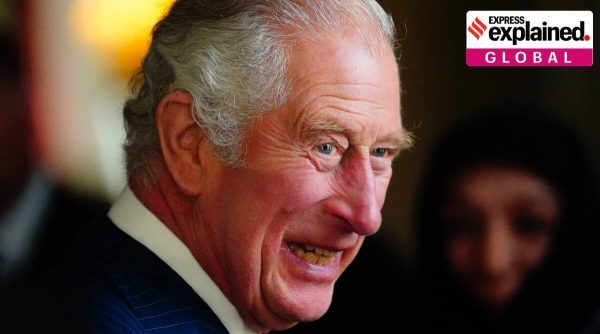 King Charles III during a reception with Realm High Commissioners and their spouses in the Bow Room at Buckingham Palace. (AP)

Canada, Australia, and New Zealand have announced that King Charles III, who succeeded his mother, Queen Elizabeth II, to the British throne on Saturday (September 10), will be their head of state as well.

“On behalf of the Government of Canada, we affirm our loyalty to Canada’s new King, His Majesty King Charles III, and offer him our full support,” Prime Minister Justin Trudeau said in a statement.

In New Zealand, Prime Minister Jacinda Ardern participated in the Proclamation of Accession for the King on the steps of the country’s Parliament along with Governor General Cindy Kiro and Speaker Adrian Rurawhe.

In Australia, Governor General David Hurley proclaimed King Charles as head of state at Parliament House, accompanied by a 21-gun salute. The Governor General is the British monarch’s representative in New Zealand and Australia.

All three countries are part of what is called the “Commonwealth realm”.

The Commonwealth realm is a group of 14 countries (not including the United Kingdom) that recognise the British monarch as their head of state — a position that is explicitly stated in the constitution and laws of some of these countries.

Canada, Australia, and New Zealand are all constitutional monarchies, with political systems that are oriented in a way that the new monarch of the UK would have become their head of state as part of the usual process.

In Australia though, a strong republican sentiment does exists — and in June this year, the new government headed by Prime Minister Anthony Albanese appointed Matt Thistlewaite as the country’s first minister tasked with overseeing a transition to a republic, which triggered talk that a referendum to remove the Queen as head of state could follow.

In some other cases, a change or law or statute may be required before Charles III is proclaimed head of state — and it could trigger calls for a referendum in certain jurisdictions. Jamaica is one example, and it could well follow its regional neighbour Barbados, which left the Commonwealth after becoming a republic in 2021.

This is a group of 56 member countries, the vast majority of which are former British colonies. They are mostly in Africa, Asia, the Americas, and the Pacific. Three European nations are part of the Commonwealth: Cyprus, Malta, and of course, the UK itself.

The 14 Commonwealth realm countries are part of the larger Commonwealth. Of the remaining 41 member states, 36 are republics — this group includes India, Pakistan, Bangladesh, and Sri Lanka. The other five — Brunei Darussalam, Lesotho, Malaysia, Eswatini (formerly Swaziland) and Tonga — have their own monarchs.

For the wider Commonwealth, the most visible uniting feature is the Commonwealth Games, the multi-sport international competition that is held every four years in one of the member countries. The Commonwealth Games — which were hosted by India in 2010 and the latest edition of which was completed in Birmingham, England last month — are pretty much the only association that ordinary Indians make with the Commonwealth, even though there are wider aspects of intergovernmental cooperation within the grouping.