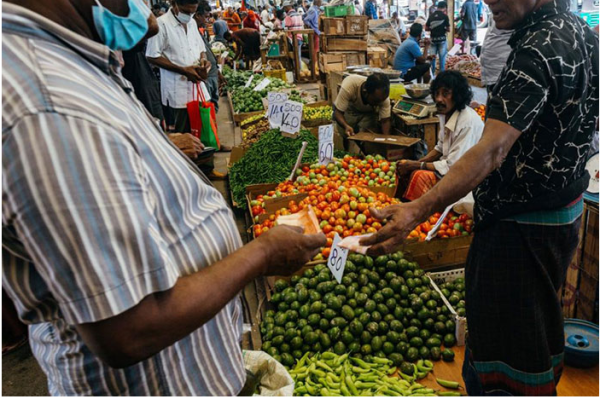 Inflation in crisis-hit Sri Lanka dipped marginally for the first time in 12 months but prices were still an eye-watering 66 percent higher than a year ago, official data showed Monday.

The island nation of 22 million people has suffered months of extreme economic hardship with severe shortages of essentials including food, fuel and medicines.The Department of Census and Statistics data showed October inflation was nearly four percentage points lower than the record 69.8 percent in September.

Food inflation which had also reached a record high for the 12th consecutive month in September at 94.9 percent moderated to 85.6 percent in October.The department did not give reasons for the slowdown in inflation, but authorities had reduced fuel prices twice in October, cutting prices by 20 percent.However, the price of petrol is still double the amount before the start of the crisis late last year, while diesel — used commonly for public transport — is still three and a half times more.

Sharp price increases for both food and fuel has led to a drop in demand and queues for petrol and diesel and cooking gas have sharply reduced in recent weeks.The World Bank has warned that the economy could shrink by 9.2 percent this year, worse than the 8.7 percent contraction the central bank of Sri Lanka had forecasted.An unprecedented downturn forced the government to default on its $51 billion foreign debt in April and go to the International Monetary Fund (IMF) for a bailout.

Blackouts, chronic fuel shortages and high prices triggered months of political unrest, ultimately forcing the president Gotabaya Rajapaksa to flee the country and resign in July. The IMF has tentatively approved a four-year, $2.9 billion bailout to help Sri Lanka reorganise its finances, subject to an agreement with its creditors.It had also asked the government to contain spiralling inflation and address corruption as part of efforts to salvage the troubled economy.