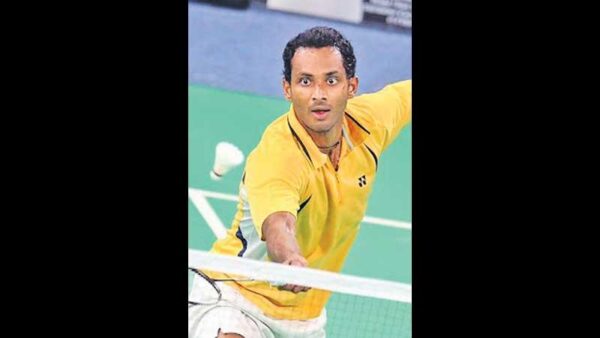 Sri Lanka’s most experienced Olympian for the Tokyo Games, shuttler Niluka Karunaratne who battled Covid and numerous challenges to improve his world ranking to 99, is determined to prove “something special” this time.

“I am very excited and very much motivated to play again for my country. It is an absolute honour and a privilege. I know with all the support in Sri Lanka and also with the Ministry of Sports, National Olympic Committee (NOC) and Sri Lanka Badminton (SLB), I can really do something special at this Olympics in Tokyo,” said Niluka who has taken part in London (2012) and Rio (2016).

Flag-bearer of Sri Lanka at the London Games and chairman of NOCSL’s Athletes Commission, his advice to those making their Olympic debut is: “It is a very positive feeling that the National Olympic Committee and Ministry of Sports has created for everybody to come together as a team. They just have to be relaxed and enjoy the moment. Feel the Olympic spirit to come out with the best performance they could ever give.”

Overweight and stricken after being Covid positive, the challenges he overcame to win an unprecedented 17th national singles title and achieve his Olympic dream is testimony to his immense will-power and tough character.

“I faced so many difficulties and obstacles since January. Because I was Covid positive, I was out of training for about one and a half months. After returning from hospital, after seven days I won my nationals. Then I had to travel to a few countries (seeking qualification). Despite going through all these troubles and obstacles, it also gives a positive feeling. Lot of energy to achieve my goal which I have already achieved as a sport and as a badminton player. I think I have a lot of courage to do something more. To do something better than the last two times,” said the 36-year-old badminton legend who explained why he is tagging his younger brother Dinuka, a three-time national champion, to Tokyo this time.

“He is my sparring partner. SLB and myself took this decision because of the highly restricted Covid regulations in Japan. We can’t mingle with the foreign players. Last two times I got an opportunity to play practice matches and train. I will be going five to six days ahead of my event. I have to keep my momentum going which can help my game as well. We made the decision to have a very strong sparring partner and technical support as well. That’s why my brother is going,” he said.