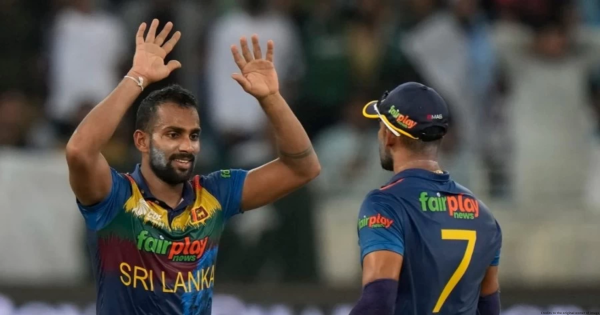 Pathum Nissanka’s brilliant unbeaten 55-run knock guided Sri Lanka to an easy five-wicket victory over Pakistan in their Super Four clash at Asia Cup 2022 at the Dubai International Cricket Stadium on Friday.
The two teams will play the final of the tournament on Sunday, September 11. For Sri Lanka, Nissanka smashed an unbeaten 55 while Bhanuka Rajapaksa played a 24-run knock. For Pakistan Mohammad Hasnain and Haris Rauf bagged two wickets each.

Chasing 122 runs, Sri Lanka got off to the worst start as they lost star opener Kusal Mendis in the second over of the match. Sri Lanka were dealt with another blow as Danushka Gunathilaka went back to the pavilion without scoring a run.
At that point, Sri Lanka were at 2-2. Dhananjaya de Silva then tried to play some big shots but fell prey to Haris Rauf, scoring 9 runs in 12 balls.
Pathum Nissanka and Bhanuka Rajapaksa then tried to anchor Sri Lanka’s innings as they smashed big shots while taking singles. While playing the much-needed innings Nissanka brought up his half-century in 41 deliveries.

After the 14th over of the match, Sri Lanka needed 30 runs in 36 balls. The duo of Nissanka and Shanaka joined hands and helped their team cross the 100-run mark. However, Shanaka was sent packing by Mohammad Hasnain after scoring 21 runs in 16 balls.
Wanindu Hasaranga then came to the crease and smashed two fours in the over of Mohammad Hasnain. In the 17th over Hasnain conceded 17 runs.
With a stunning four on the last delivery of the 17th over Hasaranga smashed a big four to take his team home against Pakistan and clinched the match by five wickets.