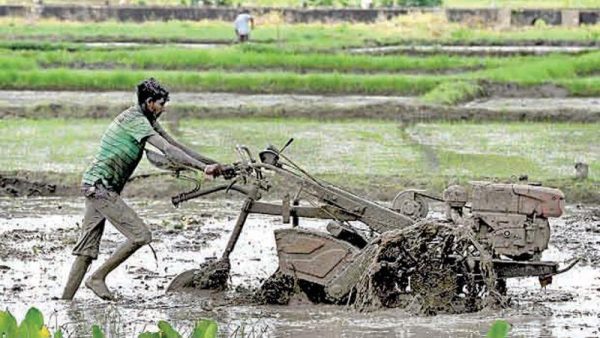 The term ‘food security’ looks simple, but it is complex. According to Food and Agriculture Organization (FAO) of the United Nations, a country is considered food secured “when all people, at all times, have physical and economic access to sufficient, safe and nutritious food that meets their dietary needs and food preferences for an active and healthy life,” said Senior Professor, Weed Science Department of Crop Science, Faculty of Agriculture, University of Peradeniya,  Buddhi Marambe told the Sunday Observer.

He said as stated many times before, agriculture in Sri Lanka has evolved over the past seven decades since independence.

Paddy production, especially, has reached its heights thanks to the forward-looking action taken by our scientists since the early 1950s and farmers embracing new technologies recommended by the Department of Agriculture and the commodity research institutes.

Since 2008, Sri Lanka was able to produce rice at levels exceeding the level of consumption in a stable manner, except for the years that we experienced climate shocks (2016-2017) and ill-considered moves by policy makers in April 2021, i.e. the ban imposed on importing synthetic fertiliser and pesticides, which are two important inputs needed for a highcrop production and productivity.

“As a result there will be a sharp dip in yield during the 2021/2022 Maha season with paddy yield (human food) slated to drop by about 50%, maize yield (mainly animal feed) by 70-75%, and foreign exchange earnings from tea exports (one of the major agric. export crop) in the first quarter of 2022 reduced by USD 52 million compared to the first quarter earnings of 2021,” he said.

Predictions made by scientists of unavoidable threat and irreversible damage resulting from this decision were not taken into account.

The President himself had accepted that the decision that did not allow farmers having access to fertiliser was wrong.

Sri Lanka was enjoying the luxury of producing the rice requirement, the main staple, within the country until 2021, and have perished just because of an ill-advised decision made of course without looking at available scientific evidence. Decision makers and advisors, seem to be unaccountable for the losses in food and feed production, livelihood of farmers (including those in the plantation sector), loss of foreign exchange to import food including the main staple, etc. Sri Lanka imported only 20,000 mt of rice in 2019, which was reduced to 14,000 mt in 2020.

Towards the end of 2021, the Government liberalised rice imports, probably understanding the impending disaster of the decision made but still boasting on the unwarranted positive impacts, and about 147,000 mt of rice was imported during the year. By April 2022, Sri Lanka had already imported about 330,000 mt of rice to the tune of spending approximately USD 92 million of precious foreign exchange.

The current Yala season (2022) shows all signs of failure again without the key agricultural inputs and out paddy yield would reduce again by at least 50%. The scientific prediction is that we will not be in a position to meet the monthly rice requirement (approximately 185,000 to 195,000 mt) from our own production from October onwards, if we continue to have the same rice consumption levels. This situation will prevail until the paddy harvest of Maha season 2022/2023 reaches the markets as milled rice in 2023. This is the impending food crisis that we all speak of. This is not to create a devil, but to let people of this country know what is in store for us and to start adapting to the situation from now on. One way that the Government could address this issue (e.g. ensure rice availability at adequate levels and allowing people to access it at affordable prices) is to import rice.

However, the country requires foreign exchange to pay the price outright or have reserves to pay the cost later through loan schemes. All calculations state that we may require approx. 800,000 mt of rice this year of which about 330,000 mt have been imported. The Indian credit line has pledged about 40,000 mt.

Food inflation in Sri Lanka during May (on a year-on-year basis) stood at an all time high of 57.4%. All signs are there that this should further increase. “We are in a crisis. It is well explained by the recent UN appeal for USD 47 million for life-saving aid to 1.7 million people in Sri Lanka. The UN Resident Coordinator in Sri Lanka, Hanaa Singer-Hamdy stated that about 22% percent of the Sri Lankan population need food assistance, and that “multiple factors are impacting Sri Lanka’s food security, if we don’t act now, many families will be unable to meet their basic food needs”. This clearly indicates the length, breadth and depth of the problem that we all have to understand to provide solutions to overcome this crisis.

“Policy makers should focus on the Yala season (2022) and also next Maha season (2022/2023) in the short run while many many long term interventions are needed.

“The available statistics indicate that the farming community has not cultivated a significant component of the land that should have been cultivated to paddy, due to the absence of external agricultural inputs. The government could immediately focus on cultivating at least a part of the land, after a careful land selection, to low-input requiring crops such as mung bean and cowpea so that at least part of the nutrition-related problems can be solved in the future. These crops, especially mung beans, have been recommended by the Department of Agriculture for cultivation in the mid-seasons. However, it is high time that we use this land in the best possible way for such short-term crops in the remaining time period of the Yala season, while having careful consideration to avoid gluts and market failures.

“The second most important aspect is to ensure the availability of seeds for planting in the next Maha season, where initiatives are required from now on. The important thing to remember is that we cannot afford another Maha season failing. If the planned cultivation of about 800,000 ha of land is to  take place in the next Maha 2022/2023, the seed paddy required of about 80,000 mt should be ready from the harvest of this Yala season.

“It is good to note that the Ministry of Agriculture has paid a lot of attention to this aspect and it is essential that we secure the seed paddy requirement at any cost from the limited harvest of this season. The government also needs to facilitate the production of seed paddy especially with growers who have been doing this as a livelihood.

“All farmers are aware of this need and It is also encouraging to see that the Department of Agriculture has taken initiatives to support seed paddy production by making available at least part of the fertiliser requirement from already available stocks in the country.

“As for maize, Sri Lanka has been cultivating imported maize hybrids and the Maha is the main cultivating season for this animal feed crop. Sri Lanka required approximately 45,000 to 50,000 mt of hybrid maize for planting in the Maha season requiring about 1,200 mt seeds.

“The country has a stock of about 450-500 mt of maize seeds as planting material and we will require about 700 mt of seed stock of maize for a better cultivating season in Maha 2022/2023. Immediate steps have to be taken to provide this requirement through imports with the support of the private sector.

“Synthetic fertiliser and pesticides are an integral part of high-productive farming systems. Pesticides and fertilisers are not the only component that provide better harvests, but the total package of agricultural practices.

“However, in the current scenario these two input categories play an important role. Hence, the government should take immediate steps to support required quantities of quality-assured fertilisers and pesticides to support the different crop production systems.

“I also see that the Ministry of Agriculture, while being cognisant of this fact, has secured finances from World Bank, Asian Development Bank and through Indian Credit Line for such procurement, which is a good move. The process should start now if at all to have the material with the farming community at the correct time. If at all inputs are limited, then the priority should be given to paddy, maize and tea, and then to the rest of the crops. While saying so, it is also important to safeguard the interest of other export crops such as rubber, coconut, cinnamon, and pepper, he said.

“Cultivating land available for cultivation at temples, school gardens and home gardens are also measures that we all can embark on at least to improve the nutritional quality of the food plate. We should also be aware of possible land grabs and clearing of natural forests for the sake of cultivation, which is not encouraged and have long term repercussions that are difficult to solve.

“Above are the short term measures to ensure we have a ‘U turn’ in this economic downfall, especially focusing on the crop production segment of the agriculture sector. The Department of Agriculture and Department of Animal Production and Health (national and provincial levels), Department of Agrarian Development, Mahaweli Authority of Sri Lanka, Universities (especially the Faculties of Agriculture), Department of Irrigation, Private sector, and farming community, should team up through an effective coordination mechanism to face this crisis that we are facing currently and about to face, Prof. Marambe said.