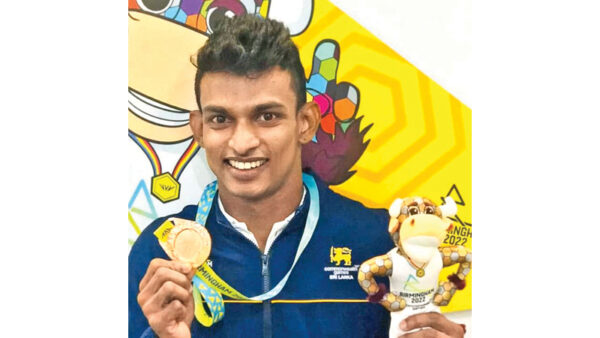 Dilanka Kumara with his bronze medal “I always had hopes of winning a medal and was confident because of the training I underwent,” said an elated Dilanka Kumara after adorning himself with a bronze medal to launch Sri Lanka campaign in weightlifting.

In a highly competitive weight category where gold medallist Malaysia’s Mohamad Aniq set a Games record of 249kg followed to pip India’s Mahadev Sargar (248), Kumara lifted a total of 225kg (105 snatch and 135 clean and jerk) to clinch third place. He failed in his attempt to snatch 112kg and lift 137kg and 141kg in the clean and jerk.

This was Kumara’s first international medal failing to win a podium place at the Commonwealth Weightlifting Championship in December but qualifying for the Games in a Singapore tournament in February.

“We had more expectations but we achieved our goal of winning a medal. Considering the situation in the country where we could not get fuel to go for training, we have to content with this performance. Perhaps his performance was affected by the chilly weather. We are confident we can win more medals in the weightlifting,” said assistant coach Rukshan Chinthaka, a Sports Officer from Wayamba Province.

The biggest disappointment was Srimali Samarakoon, gold medallist at the Commonwealth Championship and Singapore tournament in the 45kg weight class. Competing in the women’s 49kg event for the first time, she failed in three attempts to lift 90kg in the clean and jerk to finish in eighth position. India’s Chanu Saikhom Mirabai won the gold medal with a total of 201kg setting a new Games Record while Morocco’s Marie Hantra Roilya (172kg) and Canada’s Hannah Kaminski (171kg) won silver and bronze respectively.

Sri Lanka’s women’s T20 cricket team lost to England in their opening pool B match at Edgbaston on Saturday night with the hosts coasting to a five-wicket win almost three overs to spare in a low-scoring encounter. Australia beat India by three wickets, Pakistan lost to Barbados while New Zealand beat South Africa by 13 runs.

Sri Lanka’s Tuskers played their hearts out against England in their pool A match. Sri Lanka closed the gap to 21-12 at half time but England romped home 47-19 scoring seven tries and six conversions. Tharinda Ratwattee, skipper Srinath Sooriyabandara, and Buddhima Piyaratne scored a try apiece for Sri Lanka.

In the 9/16 quarter-final against Uganda, Sri Lanka lost 38-19 fighting back after trailing 19-5 at the break. Uganda scored six tries and four conversions while Sooriyanbandara, Buddhima Piyaratne and Reeza Raffaideen scored the tries for Sri Lanka.

Ganga Seneviratne competing in the 100m backstroke clocked one minute 06.17 seconds in heat seven which produced several of the fastest qualifiers for the next round.