An American hurdling for Sri Lanka at Olympics-by Reemus Fernando 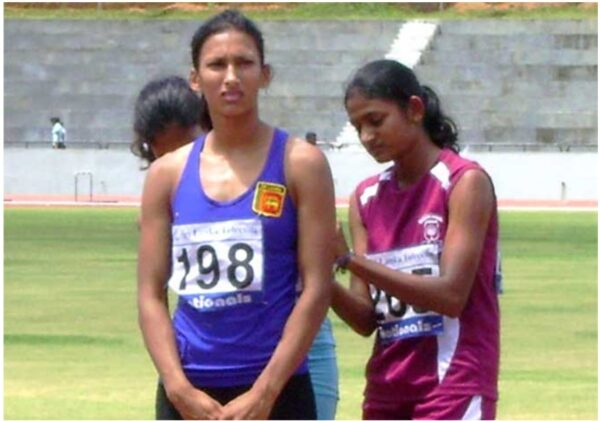 In the year 2012, the US had more than dozen  female athletes who had run the 400 metres hurdles faster than the IAAF qualifying standard (both ‘A’ and ‘B’) for the London Olympics. The ‘B’ grade qualifying standard was 56.65 seconds. While the countries like Sri Lanka were struggling to qualify athletes for Olympics, the US had a surplus. In fact, in hurdling, the whole of Asia had only three female athletes, the Japanese pair Satomi Kubokura (55.34) and Sayaka Aoki (56.62) and the Chinese Xiaoxiao Huang (56.58), who had run the discipline under the qualifying mark in 2011. By the end of July 2012, six others had managed to run under the ‘A’ and ‘B’ grade standards for Olympics from Asia. During the Olympic qualifying period, the fastest performance of Christine Merrill, born in Bakersfield, a city in Kern County, California was 56.83 seconds. Even achieving an ‘A’ grade qualifying standard does not guarantee a place in the US team for the Olympics. US athletes have to face a trial as there is an excess of qualified athletes to select from.

When more than dozen qualified US hurdlers who could not punch their ticket to the 2012 Olympics were watching the London Olympics on TV back in the US, Christine Merrill took the starters orders in the women’s 400 metres hurdles heats at the London Olympic Stadium. However, neither her name nor her country’s was announced before the race. When she completed the race, last in the fifth heat, she became the first female athlete to have represented Sri Lanka in the 400 metres hurdles at an Olympics. It was not that someone had illegally taken her to the Olympic Village. It all became possible because of her mother’s Sri Lankan origin.

With its massive TV viewer strength, the US has a huge influence when deciding disciplines of the Olympics. The women’s 400 metres hurdles made its debut when the US hosted the Games for the third time in Atlanta in 1984. Six editions after the women’s 400 metres hurdles made its debut Sri Lanka made its namesake first female representation in the 400 metres hurdles in London in 2012. It all became possible because Sri Lanka Athletics had started to look outside for formidable athletes of Sri Lankan origin to form teams for international events.  Merrill also represented the country at the 2011 World Championships and also made herself available for championships held in Sri Lanka. A year after her Olympic representation she clocked 56.45 at a competition in the USA. It is the current Sri Lanka national record. Had she not made herself available for Sri Lankan representation by 2011, probably the country would have given its Olympic wildcard to a locally grown sprinter Chandrika Subashini who had clocked 52.52 seconds in the 400 metres flat event in 2011. Subashini was placed fourth at 2011 Asian Championship in Kobe. Later she was elevated to silver medal position after initial gold and silver medallists Kazakhstan’s Olga Tereshkova and Iraq’s Gulustan Ieso, were disqualified after testing positive for banned substances.

Not many have persevered in the 400 metres hurdles in the women’s category at the senior level. Lack of competition has produced sub-standard performances at the national level. Nimali Liyanarachchi who is representing Sri Lanka at the Tokyo Olympics once tried her luck in this discipline clocking 60.85 seconds. While the country’s national record in the women’s 400 metres is held by a US citizen, the country’s national championship record of that discipline is held by a British national, Selvagowry Retchakan. Selvagowry’s National Championship record of 57.5 secs (hand timing) is 30 years old now.

Selvagowry emerged as a future prospect for Sri Lanka from Chandikulam Balika. She represented Sri Lanka at the Asian Games in 1982. But she developed as a force to be reckoned in world athletics only after she moved to the UK. When she took part in the 1992 Barcelona Olympics, where she ran her lifetime best of 54.63 seconds over the 400 metres hurdles, she was representing the UK. She won two world level medals for the UK when she finished second in the 400 metres hurdles at the 1998 Kuala Lumpur Commonwealth Games and the1992 IAAF World Cup in Havana.