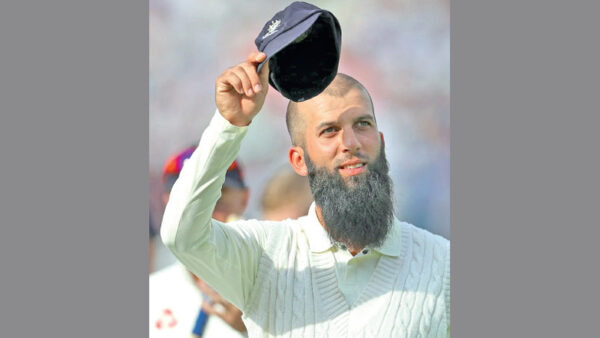 England spin-bowling all-rounder Moeen Ali has announced his retirement from the game’s longest format, bringing an end to a 64-Test career. Making his Test debut in 2014, the affable all-rounder scored 2914 runs at 28.29 and took 195 wickets at 36.66 with his off-spin.

“I’m 34 now and I want to play for as long as I can and I just want to enjoy my cricket,” Ali said. “Test cricket is amazing, when you’re having a good day it’s better than any other format by far, it’s more rewarding and you feel like you’ve really earnt it.

“I will miss just walking out there with the lads, playing against best in the world with that feeling of nerves but also from a bowling point of view, knowing with my best ball I could get anyone out. “I’ve enjoyed Test Cricket but that intensity can be too much sometimes and I feel like I’ve done enough of it and I’m happy and content with how I’ve done.”

Only James Anderson and Stuart Broad took more Test wickets for England in Ali’s time in the side, with the spinner the 12th greatest wicket-taker globally in that period.

As a spinner, his finest period came between 2017 and 2019. In 2017, he took 26 wickets at 15.64 against South Africa, claiming a famous hat-trick at the Oval. The following summer he collected 32 wickets across six Tests on tour against West Indies and Sri Lanka.

Playing every position from No.1 to No.9, it was with the bat that Ali first earned national selection and in 2016 he showed just why so many astute judges rated him highly, making 1078 runs at 46.86 for the calendar year. Four of his five career centuries came that year as he climbed to a career-high third on the MRF Tyres ICC Men’s Test all-rounder rankings.

While he has called it a day on his Test career, expect to see plenty more of Ali in England colours with the 34-year-old a part of England’s squad for next month’s ICC Men’s T20 World Cup.

The all-rounder thanked his coaches and family alike for their support throughout the journey.

“I have to thank Peter Moores and Chris Silverwood for being my coaches and Peter for giving me my debut. Cookie and Rooty as the captains who I’ve enjoyed playing under and I hope they are happy with how I played. “My parents are my number one, I feel without their support there is no way I would have made it, every game I played was for them and I know they are really proud of me. “My brothers and my sister, on my bad days they’ve been the first to pick me up and my wife and kids, my wife’s sacrifices and the patience she has, I am really grateful for that.

“They have all been amazing on my journey, everything I did I did for them.” Ali presently involve with IPL playing for Chennai Super Kings team. (ICC)