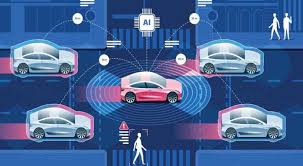 What are self-driving cars?

A self-driving car is a vehicle that can identify its environment using sensors and other cameras and depend on less human input to drive. These vehicles are also called autonomous vehicles, driverless cars and robotic cars. However, there is no production level car that is fully driverless. These cars have been extensively tested and some models are widely purchased in the commercial automobile markets.

Society of Automation Engineers (SAE) has divided the level of automation in self-driving into six levels. The first three levels require the driver to view the environment. Level 0 is driving without self-driving and a human is required to handle all functions of a vehicle. However, a vehicle may display some system issues and automate engine level electronic functionality.

In the next stage, level 1, the driver and the system share some control of the vehicle. This may assist a driver with functionalities such as lane keeping assistance and emergency braking but the driver should handle the vehicle. In level 2,  the system can handle full control of the vehicle. The driver should be able to take control in an emergency but the vehicle can partially handle all driver’s tasks. This stage requires the driver to control the environment and handle if any changes to the automation occurs. Most autonomous cars available for commercial use today are in this level.

Where is Artificial Intelligence used?

Several techniques are used by a self-driving vehicle to automate controls. One technique is using various cameras and radars to “see” the environment. A common radar method called Light detection and ranging (LIDAR) is used to map the environment. Short-range radars are used, to supplement the LIDAR, to detect blind spots whereas long-range radars are used for adaptive cruise control. These radars themselves cannot be used directly in an autonomous system and detection methods are required to separate objects required for the system to control the vehicle from other objects. Deep learning and computer vision related artificial intelligence (AI) algorithms are used to recognize objects identified using these cameras and radars.

Other methods like maps are used to control how the system handles the vehicle. For example, bends, mountains and bridges are some challenges for a vehicle. Maps can identify when a system should brake or accelerate a vehicle and when a system should stop a vehicle in case of emergency or traffic. AI is used in SAE levels 3, 4 and 5 to control which rules should be used. Furthermore, AI is required to identify which actions to be performed based on the inputs in all levels of SAE.

There were several accidents reported from autonomous vehicles since 2016 which caused several fatalities. Most accidents were caused due to not identifying humans by these cars. Failure to apply brakes due to errors in a vehicle’s controls was another cause. Most critics argued that such errors were due to errors with AI algorithms and radars used by these systems. Also, errors in deep learning models and decisions taken using rule based AI systems are some issues in these systems.