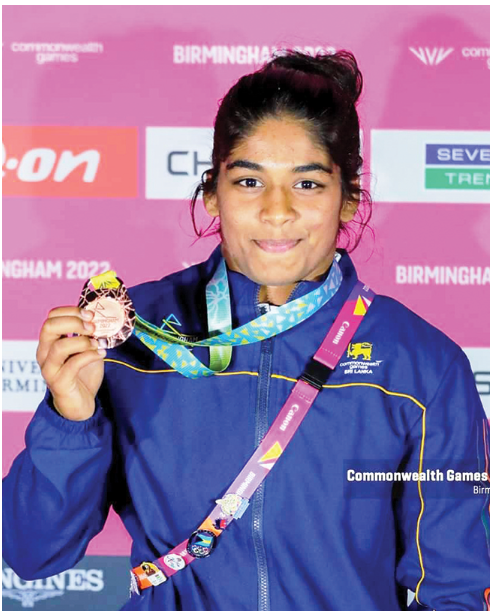 Eighteen-year-old Nethmi Ahinsa from little known Indiminna, Pannala became Sri Lanka’s youngest medallist at the Commonwealth Games as she beat Australia’s Irene Symeonidis in the 57kg weight class to win a bronze medal in wrestling in Birmingham on Friday.  She also became the country’s first medallist in the not so popular sport as she beat her Australian counterpart 10-0 in the freestyle event in the bronze medal fight.

She had to settle for the bronze medal after being eliminated by Indian Anshu Malik in the semi-final bought.   The wrestler from Welpalla Maha Vidyalaya advanced to the semi-final with a 10-0 victory over 34 year-old Cameroon athlete Joseph Emilienne Essombe Tiako. She hails from a family of four children.

Following her victory, she thanked her parents for allowing her to engage in the sport and expressed her gratitude to T.S. Suranga Kumara who not only trained her but also looked after her providing nutrition and other needs.

She said that there had been so many stories and even films on how coaches go out of their way to help their athletes achieve success but her coach was a living example of such a story.

She took to wrestling after her friend Chamodya Keshani invited her to join training in 2018. Incidentally, Keshani too competed at the Commonwealth Games in the 53kgs weight class.

She said that she did not have a wrestling mattress when she first began training but later received the support of the national federation to obtain one. After doing well at recent junior events she had also received the support of Crysbro for nutrition and also trained abroad after National Olympic Committee identified her talent.