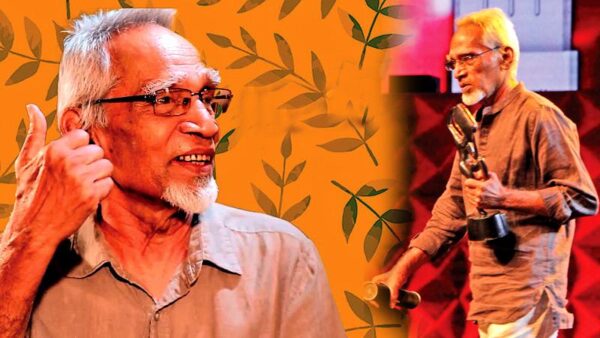 Better known not only as an actor but also as a drama Guru Deva, Hemasiri Liyanage has rendered a greater service for our film industry and theatre art. For his contribution towards producing many artistes for both small screen and silver screen, he has earned the encomium Guru Deva.

The teleplay Asalwesiyo in which he played the role of a lawyer will remind us of these lines,” Oh yes, I know the law, I know the law.” It would be correct to say that Asalwesiyo brought families with neighbours joining for a new television experience.

Hemasiri Liyanage, born on December 25, 1942 in the Nahalla Village as the third of the family, had his education at Vidyarathana College, Horana.

In 1964 he was selected to the university of Kelaniya and graduated with an arts degree.

In the university Hemasiri with his companions started a drama organisation called National Drama Corporation. Later, after the completion of his university degree, he received the appointment as an economics teacher at Vidyaratana College.

However as an additional subject Hemasiri started to teach drama. Amongst his students there was Dharmasiri Bandaranayeke. Once he had said that he began to feel the country’s pathetic political issues through the Hemasiri Liyanage’s stage plays.

Therefore, our surmise is that Dharmasiri Bandaranayeke too was influenced by Hemasiri Liyanage’s stage plays.

Never does Hemasiri Liyanage accept the Stanislavski’s acting method because Hemasiri is of the opinion that every character portrayed by the same actor or actress should be different from one another.

He started his drama career as a playwright and producer with his maiden stage play Kanakok Suda in 1967. Hemasiri’s maiden cinematic appearance came through the film Niliyakata Pem Kalemi directed by Siri Kularatne in 1983. Surprisingly, In the school , he directed a stage play titled Nadagam Hewath Sudu Atha Awata Passe in 1969 which went on to win the 2nd place at the Inter-School Competition. Moreover, Nariya Saha Keju Kella produced by Hemasiri also came under the spotlight. Both Vijaya Nandasiri and Hemasiri won the awards for the Best Production and the Best Music at the National Drama Festival. His final stage play was Chitrage Prema Kathawa produced in 1992. Speaking of his contribution to cinema, no doubt that roles that he played in movies belong to far different dimensions such as Master Mahattaya in Niliyakata Pem Kalemi, Missionary in Sisila Gini Gani, Jamis Appu in Kiyala Wedak Ne and Rony in Saptha Kanya.

Among these films Sansare Dadayakkaraya stands out as a notable cinematic creation. This movie directed by Prasanna Jayakody was based on a novel titled Dadayakkarayage Kathawa penned by the veteran dramatist Simon Navagattegana.

The Sansaraye Dadayakkaraya movie revolving around the clash between a bhikkhu who leads a life of recluse in a jungle and a hunter (Sanjeewa upananda) can be regarded as one of the notable cinematic creations.

In the movie Hemasiri plays the role of the bhikkhu who always searches for answers according to his religion and wants others to do the same. Hemasiri Liyanage is an acting theory that all the artistes should study.