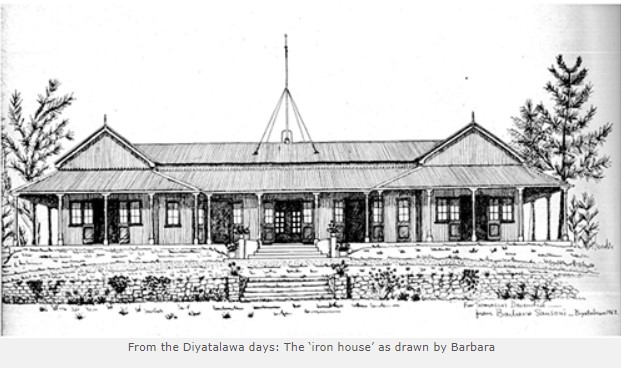 So Barbara has ridden off into the sunset, on her white horse, after “a hard day’s night” leaving behind memories of the times when she was a person, not an icon, and very good company indeed. Those memories reach back 60 years.

In 1962 I was the only unmarried officer, in our ‘ship’ in Diyatalawa – Her Majesty’s Ceylon Ship “Rangalla” – living in solitary splendour in the Wardroom (the Officers’ Mess). That made me the official host to visiting dignitaries. One day I was told to stand by to entertain a WW2 veteran, a Lieut. Cdr. Hildon Sansoni, who would be coming on a longish holiday with his family. Proctor of the Supreme Court, National Tennis Champion, one of the first Ceylonese to be commissioned in the CRNVR, a Captain who had had his ship sink under him, Extra A.D.C. to H.E. the Governor. I was on my best behaviour.

He turned up alone, a day ahead of the rest and proved to be a most enjoyable character with a puckish humour and a fund of stories. On hearing my name he asked me, “Are you D.T. Devendra’s son?” and surprised me by talking about my archaeologist-father’s account of Embekke Devale, recalling even its title “The Pillared Pride of Embekke”. He added that I would enjoy talking to his wife who would be here the next day. 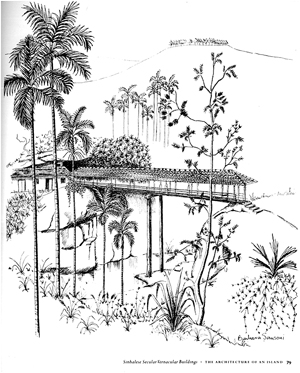 A masterpiece in wood: Barbara’s sketch of Bogoda Bridge.

Tomorrow brought Barbara, Simon of the beautiful face and the curly-mopped little Dominic of the mischievous smile. Barbara was delightful company (how could I know she was going to be Barbara Sansoni of Barefoot?) and wanted to know whether there were any old buildings in the area. I commented on someone who was writing a weekly illustrated column featuring brick kilns, hen-houses etc. and she admitted – (not bashfully, something she never could be) – that she was the culprit.  Having being bred on a diet of all things old and beautiful, I had noted several such buildings on trips to Badulla, then a most lovely drive. So I volunteered to be her guide.

Our first stop was Dowa temple where I saw her at work for the first time. I was surprised and impressed. She did several drawings while I was shooed-off: yes, I was the guide but, when the artist in her took over, I was downgraded to child-minder! Her rendering of the temple and its surroundings took me by surprise: her use of pen-and-ink to convey the lush vegetation that set off the site. And so began several forays down various roads, in her Volkswagen, stopping at various houses, mostly Muslim ones. These houses were not “modernised” and exhibited their original designs. She went in alone. Alone, she said, she could get to see the insides: accompanied by a raucous brood, she would have been refused. Years later, when “Viharas and Verandahs” came out I was pleased that the first few drawings were of Dowa and the last, of the “iron house” (more of that later).

One evening she wanted to see Bogoda Bridge, somewhere off Badulla, to which she had been directed by Roland Silva. I did not know of it. Following his instructions, we got nowhere and so we kept asking assorted people, finally finding the narrow, winding, gravel road leading down to the river. It was an overcast day. I remember, because I was to take the photographs that formed the base of her drawing and had to adjust for light (I was using a borrowed Rollei twin lens reflex).

Barbara and Hildon Sansoni in 1958

It was a fantastic place. After the preliminary sketches and a look around the Kandyan-era temple, we had to hurry back before the rains came. On our return, it began to rain and the gravelly road turned slippery. Barbara, at the wheel, was decidedly on edge and I kept up a patter of interesting trivia interspersed with helpful driving hints. Suddenly, Simon decided to do his bit. From the back seat, he recited – in a distinctly doleful voice – a popular Radio Ceylon Commercial Service jingle: “Death rides on bald tyres”! Only a mother’s love must have stopped her!

Back in the Wardroom, every evening became an animated talk-shop: Barbara talking of Geoffrey Bawa and Ulrik Plesner, Hildon about his threat to ‘thrash’ ‘Big’ Bill Tilden –  the world tennis champion (resulting in the headline “Hildon ‘beats’ Tilden!”), and I slipping odd bits in-between. Barbara was impressed that my father’s “Classical Sinhalese Sculpture” had been published by the prestigious publishing house of Alec Tiranti of London (now, alas! no more) where she bought her art materials. She was talking of Levi-Strauss’ “Structural Anthropology”(or was that on another occasion?) which was way above my head, and I was talking of A.M. Hocart’s “Caste” when I decided to up the ante and brought out my father’s copy of Ananda Coomaraswamy’s “Medieval Sinhalese Art”, a numbered first edition. Unexpectedly, she had not encountered it before and became a devotee overnight. Voila!

We had finished visiting all the old houses for miles around when I asked Barbara, “Why don’t you draw this building?” “Why? What’s so special about it?” she countered. “Look beyond the takarang cladding,” I persisted, “See the proportions and balance. See the Australian Jarra wood frame, with the metal outside and the paneling inside. The takarang absorbs the heat during the day and at night, when we close the doors and windows, we can stay bare-bodied inside. The pillars, floor and fireplace are of teak. This is a perfect house for this climate.” Next day, she inspected the building and, saying “You are right,” sat herself down in the middle of our sunken garden, and made the basic drawing and reference sketches of the foliage of the trees. She announced that she would finish it back home.

Even a longish holiday must end, as theirs’ did. Barbara and I kept in touch by snail-mail. Telephones, then, were only for emergencies. Her letters were a visual treat written in brown ink on cream paper with little sketches in the margins. We met whenever I was in Colombo and some trivia remain embedded in memory. At lunch, at her house, it occurred to me that the rich butter-yellow of her patch-work curtains were…… “Barbara, these curtains….” I began, but “Now YOU don’t start on it, too. I’ve had an earful from Roland.” At Sally Hullugalle’s house… complaining to Ulrik’s mother that she envies Mary’s sylph-like figure, only to be told that “Mary may be Pre-Raphaelite, but you are Titian!”….an evening at the Arts Centre Club.

But my comfortable cocoon in Diyatalawa was unravelling. I had met the girl I wanted to marry (I told Barbara of the 10-year gap in our ages. “But that’s perfect!” she said: she had married Hildon when he was 25 years her senior!).The Navy had to leave Diyatalawa and I was out in the cold – Colombo, Pooneryn, Karainagar, Colombo (again) and, finally, Trincomalee.

Our friendship prospered on our different planes of existence. She stayed with us in our house in Trincomalee and I was again the guide. She would sit absorbed in her drawing and I would keep the children amused and out of mischief: a picture comes to mind of my showing them a dung-beetle at work. “Viharas and Verandahs” had come and gone, by then. She was a fashion icon, weaver-extraordinary, had gone beyond the chasteness of black-and-white to a love affair with colour. She was maturing and yet being the path-finder for another generation. Hildon had passed away in a manner many would envy: having a drink with his friends, sliding down in his chair, drink unfinished. Kaput.

Many, many years later, when “The Architecture of an Island” was published, she asked me to review it for her. It was a very pleasant task and it was published in ‘The Sunday Times’. Both Barbara and I were pleased with it, even if no one else was.

Barbara continued to influence generations after that book but, for me, it was the last lap we ran together.  So I will end with an excerpt from my review.

The achievement of this book is that, in the end, it records with understanding our vernacular architecture at the end of the century. Perhaps, at the end of the next, there would be no material for another. Till then, let us be content that Ronald, Barbara and Laki have salvaged this much for our children. And for this, much thanks.”