A Trojan Horse in Diyawanna Oya – by Capt Elmo Jayawardena 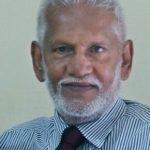 Aren’t we all wondering what is going to happen to our beloved country? Sri Lanka and Sri Lankans are at a bewildering juncture, more like an over-sized jigsaw puzzle with some of the vital pieces missing. Sajith, leading the Opposition says Gota and MR must go, and the 20th amendment should be abolished.  That is their unwavering demand.  It certainly is an appropriate ultimatum from which the SJB is determined not to budge.

That is also the main anthem of the Galle Face uprising, and it should rightly be the stubborn stand of everyone, be they organizational or individual, protesting against the current set of rulers.  As I write, it has been almost two weeks since the onset of the uproar that is currently bursting at the seams with rapid expansion. This is no ruckus caused by hired hooligans bought with a rice packet, a bottle of arrack and a few thousand rupees. This is much much more, definitely the ‘real deal’.  It is a gathering of people of all ethnicities, all religions and all walks of life rising as one voice against the tyranny of the current regime ruling our precious motherland.

The uprising is not limited to the Galle Face, it is spread across the island. The sentiment is encroaching into the very souls of Sri Lankans everywhere in the world. The clear definition of it all is simply peoples’ power, wild as a hurricane gathering momentum.  Currently it is causing gigantic waves, encompassing everyone connected to Sri Lanka. The mood today is anger and frustration, and it is seeping to the very souls of every Lankan. The crowds are everywhere. They are carrying ‘Gota Go Home’ placards and protesting in London, Los Angeles and Melbourne plus other big cities where Sri Lankans are domiciled. The entire anger has spread like wild-fire and yet the rulers of Lanka act as they are exempted from retribution. The world stage stands in front of them with such powerful leaders like Louis of France, Czar Nicolas and the Romanov family, Shar of Iran plus a host of others who thought they were invincible. History is full of demi-gods who underestimated the rage of the proletariat and paid dearly for that mistake, sometimes with their lives.

Sadly, other than a few paltry sticking plaster patches applied to deter the tide, the current rulers have not shown any positive reaction to the demands of the multitudes.  They are taking futile stop-gap actions till such time alternate arrangements could be made to retain or regain their power. The entire governmental reaction looks like a lop-sided Greek tragedy, a minor ‘Iliad’ being re-casted, of course, without a Helen.

They seem to be bringing in a ‘Trojan Horse’ to Diyawanna Oya complete the tableau.

Odysseus is already in Washington meeting the Money Barons. Does anyone know who accompanied him?

SLPP got 40 of their minions to walk across and take their seats with the Opposition.  Doesn’t that look more like a battle strategy than an act of individual political conviction?  Now they also put together a new Cabinet with the ‘B’ team on display. We all know such matters could be changed at any time at a whim and a wish of the President.

All these are the visible situations, and it sure looks like there is a Trojan Horse in Diyawanna Oya. After all, can one sanely imagine that these 40, playing musical chairs will vote against the SLPP if a crucial vote is called for by the Speaker?

Is there a time-tested way out of this quagmire?  No, of course not. Yet, we all know a change is imperative, even if it is a matter of falling from the frying pan into the microwave.  Anyone who is protesting against the Royal family should not settle for anything less than a power change at the top. 20th amendment has to be abolished.  Otherwise, what will happen to Sri Lanka will be the same thing that happened to the all-powerful City of Troy, broken, burnt to cinders with only the ashes to remain.

So far there is one sorrowful death. Let not that Rambukkana man’s innocent life be lost in vain. Chaminda Lakshan was no criminal. Just an ordinary citizen waiting to buy petrol for his motorcycle.

He was no different to you or me. And now’ he is dead.  Why?

This is our country – and we have had enough.