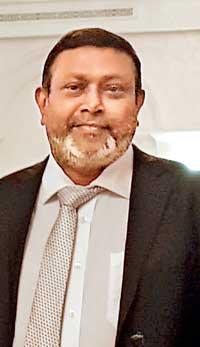 It was with great sadness that we heard the news of the passing away of Hanif Abdeen on August 25. Born on April 17, 1968 Hanif had the opportunity to pursue his primary and secondary education at S.Thomas’ College, Mount Lavinia. At an early age he followed in his father’s footsteps administering the family business at  Abdeen Jewellers.

With the demise of his father M.J.Abdeen in 1993 Hanif then took over the business with his younger brother Izadeen and carried the burden of looking after his family from a very young age.

Hanif was an individual who enjoyed the company of people. Needless to say he had a heart of gold. He was also very fond of children and would never let them leave Abdeen Jewellers without a sweet. He shared his love with a cup of tea with everyone who visited him in his office.

He contributed immensely to his Alma Mater and went on to serve the people and had a passion to help anyone and everyone at the time of need. He never looked at race or religion when he wanted to give. He was also the reason behind the ‘Pin thaliya’(a traditional container that provides clean drinking water) situated outside of Abdeen Jewellers in Colombo-03. He had also built houses and provided electricity and water to many people living in rural areas and remained secretive about such work.

He lived a very exemplary life through which he unselfishly gave and touched the hearts and minds of countless people. He was more concerned about the health conditions of his friends than that of himself. He would never fail to brighten someone’s day even though such efforts were channelled via whatsapp image/video. He strived to put a smile on someone’s face.

It is sad that the world couldn’t have him for a longer time. We have no doubt that he will be in the best place anyone could be in their after life and reunited with his beloved father. May his blessed soul reach the highest peak of Jannat-u-l Firdous.

‘Inna Lillahi wa inna ilayhi raji’un’
(Verily We belong to Allah and verily to Him do we return)
From Zara and Amara Abdeen (sister in
law and niece).