A revolution on a razor’s edge – BY VIMUKTHI SARATHCHANDRA 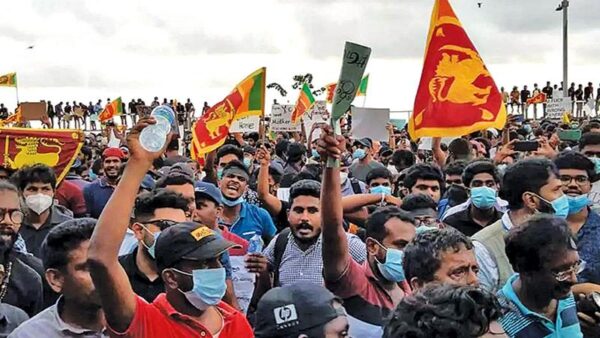 Sri Lanka’s Revolution 2022 is yet to be well documented. Much is said and written on what led to the Revolution. An unprecedented wealth of information can be gathered to compile a political treatise. Such a treatise would never be an analysis or mere history. It will be the story itself – the cinematic style just as it unfolds today. 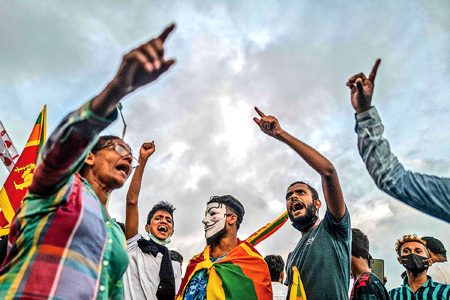 The exact meaning of the term ‘revolution’ is yet to be known and cannot be accepted by everyone. Yet, speaking of revolutions, one cannot simply neglect the Lenin factor as he revolutionised the concept. This essay is not aimed at celebrating the life and times of Vladimir Lenin nor defending certain political parties claiming to follow the ideologue. Quite the contrary. Though his ideology is heavily questionable in today’s context, studying the foundation he laid is important.

Vladimir Lenin believed in educating the masses about their size and might. The unfair exploitation of the bourgeoisie could be suppressed only if the proletariat would become aware of their strength and superiority. With this, they can come together to create an uprising that would overthrow the ruling class and establish a dictatorship of the proletariat.

Lenin launched his revolution in 1917 with a belief that the Proletariat has more manpower than the limited crowd of the bourgeois. Like an elephant clueless about its size and might, he believed that the proletariat would never dare battle against injustice until they come to terms with their size and might. Therefore, Lenin used this to extend his education program on the proletariat.

Lenin’s lesson is clear: To ignite a revolution, it is necessary to educate the masses that they have the power to bring about their desired changes. It is essential to educate them about their size and might. In other words, it is essential to make those who are oppressed realise the injustice they are being subjected to and make them aware of their ability to do something about it.

Although there are many criticisms of the Soviet Union and Lenin’s leadership, there is no denying that his idea of educating people about their size and might proved effective. It was this idea behind the propaganda campaigns of women, workers, farmers and other ordinary citizens that brought forth much-needed change in society.

Lenin’s belief in educating the masses about their size and might birthed the wide and effective use of media in the recent history. The media, especially the press, had served an important role in spreading the word of socialism and its people-friendly policies. And Lenin, being a part of it, used this medium to educate the common masses about their size and force. This led to a powerful effect that changed the course of history.

Fast forward, we now live in a digital age which pales Lenin’s use of mass media into insignificance. But Lenin’s ideology of educating society persists. The Internet has opened many new opportunities for societies around the world. With a vast array of communication methods and platforms available online, people are now more able to connect with each other from across the world, no matter what their cultural background or level of education is. 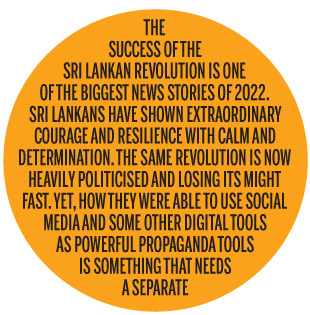 The success of the Sri Lankan revolution is one of the biggest news stories of 2022. Sri Lankans have shown extraordinary courage and resilience with calm and determination. The same revolution is now heavily politicised and losing its might fast. Yet, how they were able to use social media and some other digital tools as powerful propaganda tools is something that needs a separate analysis.

Fall of the monopoly

Digitalism has brought a great shift in the media industry. Before digitalism, the mass media was a monopoly. The advent of the Internet, social media and mobile revolutionised everything and de-shaped the monopoly. Digitalism turned the traditional marketing model upside down with products becoming content and consumers becoming producers.

Digitalism has become the defining feature in this century, with new forms of content and creation emerging ahead of general use. This is already happening through social media, which acts as an access point for all information, including mass media. Digital media such as Twitter, Facebook and Instagram create a platform for people to reach their audience without the restrictions of traditional media. The digital era allows everyone to become a publisher.

Digital media has transformed the way we create and consume information. In other words, it has led us to technologically advanced times in which we can do more than just listen to the mainstream media. We can interact with each other on social networks and share videos, pictures, and text stories.

The triumph of the protest lies in the fact that it was a spontaneous outburst of public sentiment and protest. The Aragalaya, as the protest is uniquely known among all quarters, had many reasons to succeed. The first and foremost reason is that it has solid digital backing. Social media platforms act as a medium for communication between networks and rapid transmission of information between participants. Social Media sites, especially Facebook and WhatsApp posts, were used by the most active members of the protest, who were also protesting at strategic locations all over the island. As a result, the Aragalaya became a powerful medium for expression and communication. Social media became such a norm that it influences the opinions of people at large.

The use of the internet in Sri Lanka, especially social media, is on the rise. It was empowered by the advent of mobile phones and smartphones that have aided greater connectivity and access to information for everyone. Social media is now a tool for people to express themselves politically, socially, and culturally. With several political parties taking advantage of it as well as individuals who are concerned about some issues prevalent in society. 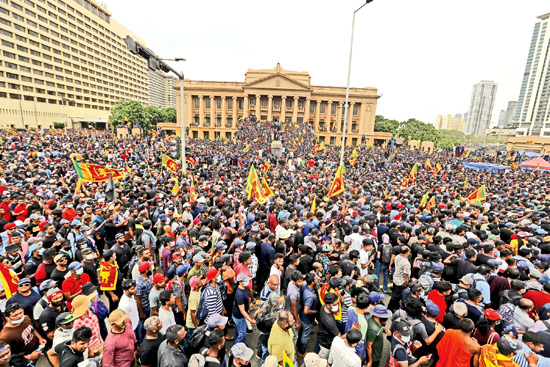 Social Media is a double-edged sword. Its capacity to generate fake news is immense. However, it played a historic role by providing a platform for generating audio and video content evidence against any fake news that may have been circulated by the counterrevolution forces. This phenomenon was at its pinnacle during this revolution.

Sri Lanka’s revolution in 2022 was not fought or started by a particular political party but it was an epoch event. Its success would not have been possible without the participation of the masses who were not affiliated with any political party. It is the Sri Lankans who came together to express their oppression.

In a learned essay on revolutions, Peter McPhee, Emeritus Professor from the University of Melbourne lists five major characteristics of a revolution:

1. Long-term causes and the popularity of a socio-political ideology are at odds with the regime in power.

3. Moments of violent confrontation the power-holders are unable to contain as sections of the armed forces defect to rebels.

4. The consolidation of a broad and victorious alliance against the existing regime

5. A subsequent fracturing of the revolutionary alliance as competing factions vie for power

Sri Lanka’s revolution in 2022 is a good example of how social media can be used to benefit society and bring in a massive societal change. It played a vital role in the initial time in creating awareness and implementing change which lead to success. But after gaining momentum, this success is being compromised by political parties trying to claim ownership of the campaign. This will only lead to a slowdown or even the end of the campaign.