“A GEM OR TWO”-by Des Kelly

1.. Once again, via Keith Bennett, Bertram Daniels, and “Your’s truly” e ‘Lanka members, readers, and fans are privileged/or as the case my be, (this time), subjected to a gem or two, depending on how you would like to look at them.

The less said, the better. Here they are, ladies & gentlemen,

The first gem has to do with a new James Bond in mind.

They have been searching in vain, for someone again, to relive the 1983 movie Octopussy, the Bertram comes in, and says with a grin, “I have someone, if we aren’t too fussy. My new JB, & his 1st feature film, unforgettable.

Now, with our present election in progress, people are getting a bit fed up with all the “argy-bargy” being served up to them, broken promises past, & many more due in future,

so much so, that our Scientists have begun reminding us that our dear Planet is now overcrowded (around 9 billion people), and as such, after already examining the Moon and Mars even, they are right now recommending NASA to prioritise what they term “Mission Uranus”. This is where I come in, with a free “Ad” of just THREE IMPORTANT WORDS, at the final countdown viz “10,9,8,7,6,5,4,3,2,1, blast off”!!!—“YAY, UP URANUS”, and that, folks, is putting it, as politely as I can. 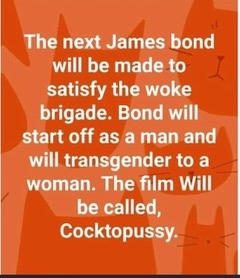