A forest enveloped in holiness- BY MAHIL WIJESINGHE 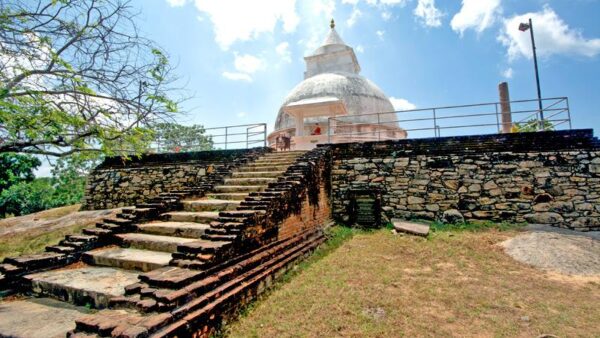 A Dagaba on a higher platform

Ifirst visited the Magul Maha Vihara in 1990 with my mother during one of our regular pilgrimages to Kataragama. Normally, pilgrims to Kataragama make a detour to Situlpahuwa, an ancient Buddhist site in Block I of the Ruhuna (Yala) National Park.

The journey was so fascinating in not only visiting ancient ruins of temples but also spotting an abundance of wildlife in the park.

On the same road is a range of rocky boulders close to the present-day Palatupana which has been identified in the chronicles with Paluttagiri, known as the Magul Maha Vihara today. Since that trip, I’ve returned to the ancient site nearly a dozen times in the past few years, spending each visit observing the hallowed ancient sites.

There is an assembly of rock caves with drip-ledges, ancient brick walls, dagobas and pre-Christian era inscriptions, with the lotus flourishing in the rock pools.

According to history, Vijayabahu I staged a relentless siege here on the Cholas until they were defeated and driven in a headlong retreat to the Raja Rata. The line of dressed rock was a partly conserved dagoba until recently, which is now fully renovated.

It is popularly called the Magul Maha Vihara to commemorate the marriage celebration of Vihara Maha Devi, the daughter of Kelanitissa to Kavantissa, the ruler of Ruhuna. Devi, according to tradition, was set adrift on a boat by her father as a living sacrifice consequent to the remorseless sea erosion in his kingdom.

After days and nights of drifting, her boat touched at Kirinda where the King’s soldiers found her and took her to Kavantissa who married her at the palace. Hence the name. They were the parents of Duthagamini, or Dutugemunu.

However, some say that Princess Devi drifted ashore in Pottuvil near the Muhudu Maha Vihara in the Eastern Province. This story, however, is debatable.

Historical notes state that the temple complex built in the 1st century BC, was once a hermitage of considerable size, the main cave spread across two rocky outcrops facing the dagaba. From a distance, you will glimpse the cave.

As you get closer, an ancient wooden doorway with hinges comes into view. The massive columns of the doorway are set in a wall which encloses the entrance to the cave.

An ancient Brahmi-inscription etched above the door frame is clearly visible when one looks at the brick-built wall. A copper ring-bell hangs above the door to communicate the Bhikkhunis who occupied other caves elsewhere in the Vihara premises.

When I visited the cave in 1990, it was inhabited by Bhikkhunis attired in saffron robes.

Until a few years back, the Magul Maha Vihara remained inhabited by a few bhikkhunis dwelling in the cave. They received raw foods such as rice and vegetables from pilgrims who visited Situlpahuwa. The rock pools filled with water lilies near the cave provided them with water.

The Bhikkhunis cooked their meals themselves and the leftovers were fed to peacocks, jungle fowls and deer; while elephants ventured right up to the doorway.

The chanting of pirith verses could be heard from a distance, while smoke rose from the kitchen chimney indicating life.

My recollection goes back to 1990, when I first visited  the Magul Maha Vihara at Yala.

We were on a pilgrimage.

The front wall built with thick bricks had a narrow doorway and two small windows.

The monastic cave was occupied by saffron clad bhikkhunis. They said they were not disturbed by wild animals that roamed nearby, not even when wild elephants put their trunks inside the cave.

However, during my recent visit, I saw the main cave and the entire site has been taken over by the Situlpahuwa temple.

The meditating bhikkhunis had left the place a long time ago and a lay devotee inhabited the cave.

Around the base of the rock is a swathe of litter, plastic bottles and polythene bags carelessly left out for the animals to eat.

Unlike the rest of the sanctuary, the best way to enjoy the sight and sound of the wilds of the Magul Maha Vihara is to traverse by foot instead of in a vehicle.

Monuments filled Ruhuna played an important part from very early times in the history of Buddhism.