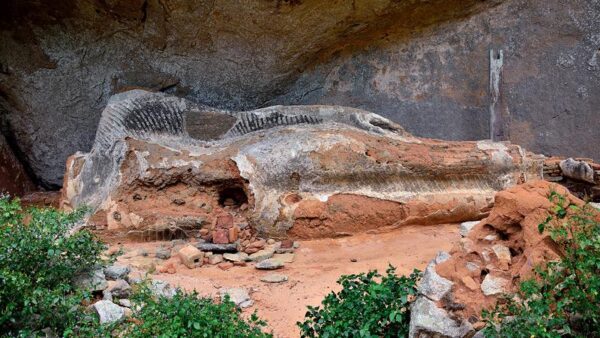 Our destination was Bambaragasthalawa in the Yala East National Park and it was a six-member group. After venerating the Okanda temple, we reached the entrance of Kumana National Park.

Entering the park, we were fortunate to see a Black Necked Stork in one of the lagoons. We were briefed by our guide that there were only seven in the entire country. Crocodiles, wild buffaloes, eagles, tuskers, wild boar, deer and many kinds of birds caught our attention as we drove along muddy holes and the sandy tracks of Kumana jungle to reach our destination. 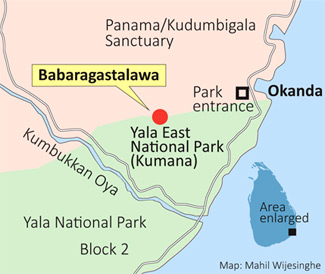 A routine trip to Kumana to enjoy not only the fauna and flora but also visit the ancient ruins, artifacts and archaeological monuments led to a tragic discovery. This was our second trip to Kumana. Our maiden journey was in 2013, when we explored ancient archaeological sites such as Bambaragastalawa and Bowattagala which are ruins spread around Kumana.

The Bambaragastalawa rocky outcrop lies nearly five kilometres west of Okanda, and the main rock ends in an unscalable peak spread out in the surrounding jungle, with immense boulders and enchanting caves with drip ledges and rock cut flights of steps lying in groups. Many of these caves provided natural shelter for meditating bhikkhus during the 1st and 2nd Centuries BC. 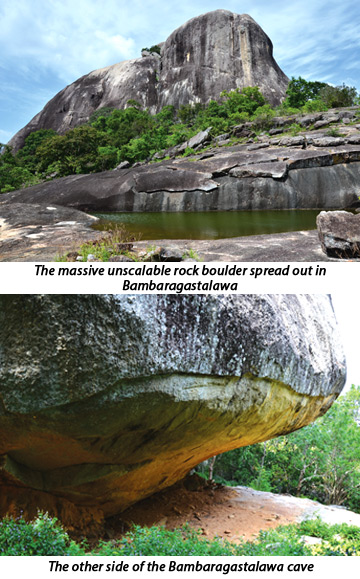 From this early beginning, Bambaragastalawa prospered and it grew into an important monastic shrine. It reached its peaks many centuries later during the late Anuradhapura period, when a reclining Buddha statue was discovered constructed in one of the larger caves. Very few such statues made of bricks and sand and lime plaster exists. This reclining Buddha statue is built in the tradition of the Anuradhapura period most probably the 9th Century AD.

Passing the brick wall we entered into a larger cave and there, a resplendent reclining Buddha statue lay. The entire statue had been made of brick and the finish and detail of the Siura or robe was amazing. No one seemed to know much about the origins of this Buddha statue. We could assume that this had been a temple complex during ancient times. Nothing else remained except for the Buddha statue, though there was another cave on the other side of the rock.

It was vandalism of the worst kind on a precious Buddha statue at Bambaragastalawa in Kumana that we stumbled upon. On our first visit to Bambaragastalawa, we found the head lay smashed to bits and the stomach dug out. Some parts of the bottom of the statue have decayed and ancient bricks had surfaced due to heavy rains.

Treasure hunters had searched for gems and valuables from time to time, not caring about the rare statue. There is a common belief that precious gems and objects of value may have been embedded in statues. We found the statue in a pathetic state while on our first visit the site in 2013 caused by digging from head to toe by vandals.

It is said that Bambaragastalawa had been occupied by a pygmy population in Sri Lanka called Nigantayas. However, today the entire area has been engulfed by jungle.

As we returned to the vehicle the sounds of the wild alerted our senses. Apparently the cave complex is a favourite of bears and it is no wonder that we heard one of them call out as we made our descent.

In January 2018, when we revisited the Buddha statue of Bambaragastalawa, we found that the destroyed statue has been retouched and reconstructed by the officials of the Department of Archaeology as part of the project initiated to boost tourism in Kumana National Park.

Destruction by the public

Probably, most of the destruction of the reclining Buddha statue of Bambaragastalawa had taken place after Kumana was opened to the public following the ceasefire. Projected in the LTTE map in the Eastern Province, Kumana became a jungle hideout of its fighters. Compared to the other sites of Kumana, the LTTE fighters did not damage any of the artifacts of Kumana except scribbling on the rock caves with their names in Tamil language.

Kumana has a generous sprinkling of drip ledged caves in areas such as Kongala, Bowattagala and Kiripokunahela with evidence of ancient Buddhist hermitages. We also found stone pillars, remnants of ancient stupas, early paintings in Bowattagala and Kiripokunahela with stories abounding in the area that there had been a monastic complexes for bhikkhus of the Anuradhapura period.

The rock inscriptions in the ancient sites of Kumana provide the proof of meditating bhikkhus had inhabited these drip-ledged caves as long ago as the 2nd and 3rd Centuries BC. The ravages of time have left most of them in ruins in the jungle, now home to wild animals.