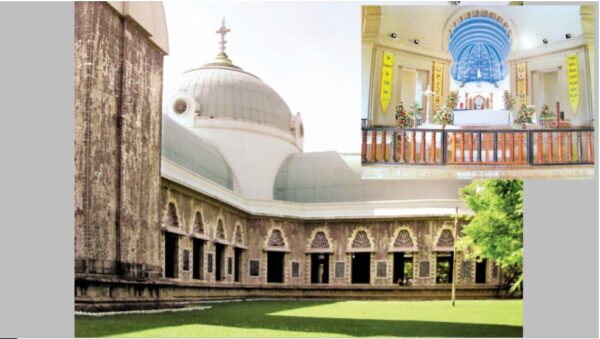 The Bible records the ministry of Jesus Christ where he often stopped to heal those who were physically sick. He also delivered solace and hope for those in need of emotional healing. Centuries later the Christian ministry of healing, augmented by faith in God continues. The majestic Tewatte Basilica dedicated to Our Lady of Sri Lanka has been a church where people of all faiths gather to pray. Set amidst beautiful lush gardens this basilica is a spiritual oasis for thousands of Sri Lankans. 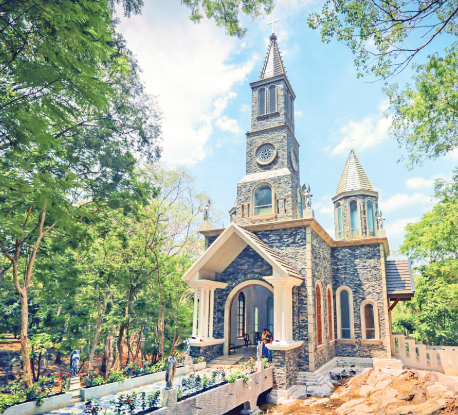 To the Catholic community in Sri Lanka the Basilica of our Lady of Lanka or ‘Tewatte Palliya’ is one of their most venerated shrines. It remains the iconic landmark of the Ragama area. I enjoyed visiting this sanctuary of solace on many occasions. In previous years the main archway leading to the shrine, has hundreds of devotees already descending the cement steps. On the first landing there are statues of the two dedicated clergymen associated with the building of this magnificent church – Archbishop Masson and Cardinal Thomas Cooray. From this point there is a large garden where rows of Na trees offer shade, enriching the serenity of the blissful basilica.

A House of Prayer

Along the pathway there were some verses displayed from the Holy Bible and the first one was from the book of John in the New Testament, where the risen Lord Jesus Christ said, “Come to me all who labour and are heavy laden and I will give you rest.” This assuring invitation of Jesus Christ is indeed refreshing to all pilgrims, who come here with various prayer requests. As the scripture states, Jesus Christ is the way to the Father, the One who sacrificed His blood for the atonement of our sins. Upon that cross He took on the burden of our sin and shame, and He is our source of spiritual rest and inspiration. The chirping of birds within the trees was a delightful natural chorus. The façade of the Basilica was impressive.

The six pillars indicated the six diocese of the church in that era – Colombo, Chilaw, Galle, Jaffna, Kandy and Trincomalee. The crucifix glittering in the morning sun was a reminder of the love that Jesus Christ had for all of us. Above this level one can see the form of a Greek cross, with its distinctive horizontal bars. Decades ago there was a small chapel built here in 1911 by Rev. Fr. Kieger, dedicated to Our Lady of Lourdes. The people from the Ragama parish helped Rev. Fr. Collorec to extend the grotto in 1917. This was the humble beginning of the Tewatte Church which today stands as a Basilica.

It is believed that during the period of the Second World War there was an impending threat of an aerial assault by Japanese aircraft, and most Ceylonese were scared. The pious Archbishop Masson had prayed earnestly that all Ceylonese should be kept safe from the air raid and made a vow that a shrine would be built to Our Lady once this period of war had ceased.

Subsequently, when the first Ceylonese Archbishop, His Eminence Cardinal Thomas Cooray took over the reign of the Catholic Church in Ceylon, he began to envisage this daunting 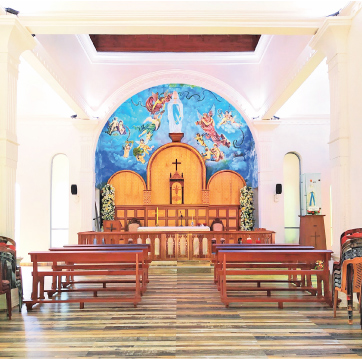 project with faith. It is recorded that the Church owned a small land on which the old chapel stood. Another clergyman named Rev. Fr. Claude Lawrence had prayed that they would find some land next door, and shortly the estate named Orange Hill was up for sale. The Church made the purchase. Plans and designs were needed and a prudent Jesuit monk named Fr. Heras designed the Basilica with some elements of Indian architecture.

We walked along the beautiful garden path and were joined by an elderly Franciscan priest. In keeping with the trademark humility of his religious order this friar declined to give his name. The massive walls of the Church were erected with dressed stone. The kind old priest pointed towards the top of the altar, “Son, look at that small wooden cross. It is known as the San Damiano cross, the cross of the Franciscans. The Cardinal was very close to our order and he put our symbol there as a reminder, in recognition of the good work of all our friars from that era.”

It reminded me of the words of Saint Francis of Assisi who once proclaimed in Latin: Deus Meus et Omnia (meaning My God – My All). This statement of faith and renunciation should be reflected upon by present-day Christians. I noticed another unusual feature at the wooden altar railing. I observed that the portions of wood were from different trees – teak, iron wood, jak, red sandalwood and mahogany. It is said that Cardinal Cooray was a botanist and he used this knowledge in the artistic expression of this shrine. The late Cardinal had personally supervised the massive gardens and landscape, incorporating ‘eco friendly ideas’ which are being talked about today. The main altar had anot

her unique display – two elephant tusks. The story behind these tusks can be traced back to the period of uncertainty from the Second World War. Ceylon was facing a mild economic crisis and people took their liquid cash and invested in material things. It is believed that the wise Cardinal had done the same and purchased the two tusks. 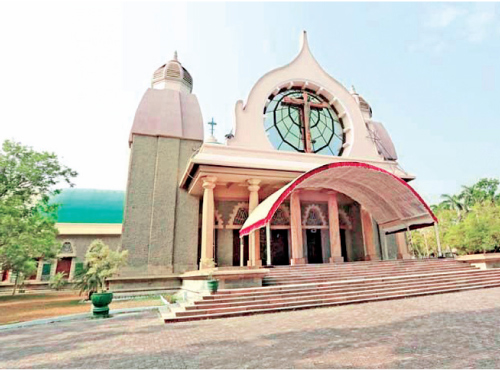 From here we walked down to the crypt, along with our Franciscan friend. Part of the crypt has been modified into a chapel, and people were engaged in prayer. The body of Cardinal Cooray is in this crypt, with a life-like marble bust mounted on a pedestal. Once outside I spotted two nuns and decided to talk to them. Attired in blue, Sister Regina began the conversation saying, “We are from the order called Sisters of Providence. Decades ago, our sisters were working at the chest hospital in Welisara. The sister superior was a French nun. They were invited to apostolic service at the Basilica and to date we take care of the Retreat house.”

Along with them there are other religious orders at Tewatte – the Sisters of St. Clare, Rosarian Sisters and Sisters of Mary Immaculate. Within these massive premises one can also find a small granite chapel and a grotto. It is believed by many that the grotto is similar to the one found at the pilgrimage site at Lourdes. It is recorded that the statue of Our Lady of Lanka was sculptured by one Thedim of Fatima and brought to the Basilica in December 1952. Cardinal Cooray had asked that three Na flowers be induced in the pedestal of the statue, enhancing the Sri Lankan expression.

The incumbent administrator of the Basilica is Rev. Fr. Jude Sriyananda Fernando. This year the annual healing service is scheduled to be held on August 29. According to a Church staff Colombo Archbishop His Eminence Malcolm Cardinal Ranjith, will be the presiding prelate. Due to the ongoing Covid pandemic only a representative number of clergy will be at the mass. Plans are underway to televise the service, so that the public can watch from the safety of their homes. Thus the National Basilica continues to unite Catholics in prayer and devotion. What you are is your gift from God, what you become is your gift to God. 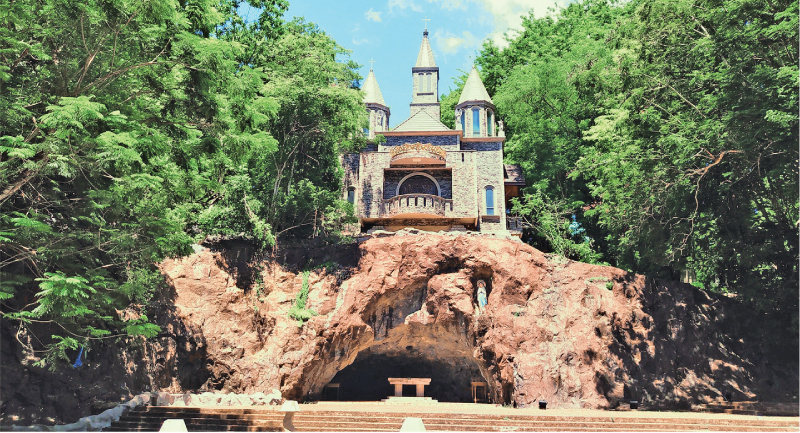