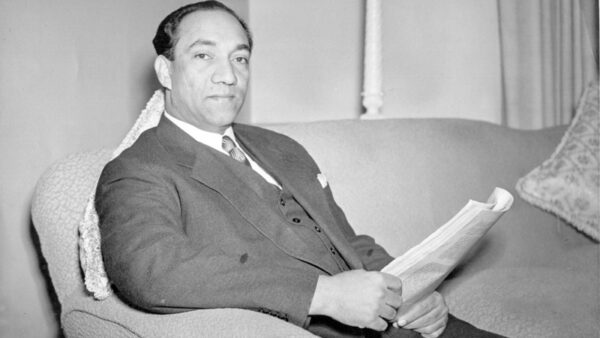 Excerpts from the speech made by Sri Lankan Finance Minister J.R. Jayewardene at the San Francisco Peace Conference in September 1951.

“I consider it a great privilege to be afforded the opportunity of placing before this assembly of fifty-one nations the views of the Government of Ceylon on the draft Treaty of Peace which we have been invited to approve. My statement will consist of the reasons for our acceptance of this Treaty and I shall also attempt to meet some of the criticisms that have been levelled against it. It is true that I can speak only on behalf of my Government, but I claim that I can voice the sentiments of the people of Asia in their general attitude towards the future of Japan.

I need not deal with the events that led to the formulation of the final draft of the Treaty which we are considering. Mr. Dulles, the American representative, and Mr. Kenneth Younger, the British representative, have given us a full and fair account of those events, beginning with the capitulation of Japan in August 1945. It may, however be mentioned that there was a serious conflict of opinion between the four major powers as to the procedure that should be adopted to draft this Treaty. The Soviet Union insisted that the four major powers alone – that is, the Council of Foreign Ministers of the U.S.A. U.K., China and the U.S.S.R should alone undertake it, and that the power of veto should be reserved to them if any others were admitted for the purpose of drafting the Treaty.

The United Kingdom insisted that the Dominions should be consulted and the United States of America agreed with this. They also supported consultation with all the countries that took part in the war against Japan.

Among these countries, too, there was a difference of opinion as to the actual terms of the Treaty actuated by various considerations, some by a fear of the raising of a new militaristic Japan, and others yet unable to forget the damage and the horrors caused by the Japanese invasions. I venture to submit that it was at the Colombo Conference of Commonwealth Foreign Ministers held in January 1950, that for the first time the case for a completely independent Japan was proposed and considered.

The Colombo Conference considered Japan not as an isolated case but as part of the region known as South and Southeast Asia containing a large proportion of the world’s wealth and population, and consisting of countries which have only recently regained their freedom, whose people were still suffering as a result of centuries of neglect.

Two ideas emerged from that Conference – one, that of an independent Japan, and the other, the necessity for the economic and social development of the peoples of South and Southeast Asia, to ensure which, what is now known as the Colombo Plan was launched. Mr. Kenneth Younger has explained how, after that Conference, a Working Committee of Commonwealth High Commissioners worked on a draft Treaty and later had consultations with the American representative, Mr. Dulles. The Treaty now before us is the result of those consultations and negotiations. It represents some of the views that my Government had, and some of them which it did not have.

I claim that at the present moment it represents the largest common measure of agreement that could be attained among the countries that were willing to discuss peace with Japan.

The main idea that animated the Asian countries, Ceylon, India and Pakistan, in their attitude to Japan was that Japan should be free. I claim that this Treaty embodied that idea in its entirety. There are other matters which are external to the question of Japan’s freedom, namely, should that freedom be limited to the main islands of Honshu, Hokkaido, Kyushu, and Shikoku, or should it extend to the several minor islands in the neighbourhood? If not, what should we do with those islands? Should Formosa (Taiwan) be returned to China in accordance with the Cairo Declaration of 1945? If so, to which Government of China?

Should China be invited to the Peace Treaty Conference? If so, which Government? Should reparations be exacted from Japan? If so, the amount? How is Japan to defend herself until she organizes her own defence? The main question of the freedom of Japan, we were able to agree ultimately, and the Treaty embodies that agreement. On the other matters, there were sharp differences of opinion, and the Treaty embodied the majority views. My Government would have preferred it if some of those questions were answered in a different way, but the fact that the majority don’t agree with us is no reason why we should abstain from signing the Treaty, which contains the central concept of a free and independent Japan.

We feel that the allied matters I mentioned earlier are not insoluble if Japan is free, that they are insoluble if Japan is not free. A free Japan, through, let us say, the United Nations organization, can discuss these problems with the other free nations of the world and arrive at early and satisfactory decisions. By signing this Treaty we are enabling Japan to be in a position to do so, to enter into a treaty of friendship with the Government of China if she decides to recognize her, and I am happy to state, enabling her to enter into a treaty of peace and friendship with India. If we do not sign this Treaty, none of these eventualities can take place. Why is it that the peoples of Asia are anxious that Japan should be free? It is because of our age-long connections with her, and because of the high regard the subject peoples of Asia have for Japan when she alone, among the Asian nations, was strong and free and we looked up to her as a guardian and friend. I can recall incidents that occurred during the last war, when the co-prosperity slogan for Asia had its appeal to subject peoples, and some of the leaders of Burma, India, and Indonesia joined the Japanese in the hope that thereby their beloved countries may be liberated.

That is why I cannot subscribe to the views of the delegate of the Soviet Union when he proposes that the freedom of Japan should be limited. The restrictions he wishes to impose, such as the limitation on the right of Japan to maintain such defence forces as a free nation is entitled to, and the other limitations he proposes, would make this Treaty not acceptable not only to the vast majority of the delegates present here, but even to some of the countries that have not attended this Conference, particularly India, who wished to go even further than this Treaty visualizes.

If again the Soviet Union wishes the islands of Ryukyu and Bonin returned to Japan, contrary to the Cairo and Potsdam Declarations, why should then South Sakhalin, as well as the Kuriles be not also returned to Japan. It is also interesting to note that the amendments of the Soviet Union ‘seek to insure to the people of Japan the fundamental freedoms of expression, of press and publication of religious worship, of political opinion and of public meeting’ – freedoms which the people of the Soviet Union themselves would dearly love to possess and enjoy.

The reason why, therefore, we cannot agree to the amendments proposed by the Soviet delegate, is that this Treaty proposes to return to Japan sovereignty, equality and dignity, and we cannot do so if we give them with qualifications. The purpose of the Treaty then is to make Japan free, to impose no restrictions on Japan’s recovery, to see to it that she organizes her own military defence against external aggression and internal subversion, and that until she does so, she invites the aid of a friendly power to protect her, and that no reparations be exacted from her that harm her economy.

This Treaty is as magnanimous as it is just to a defeated foe. We extend to Japan a hand of friendship, and trust that with the closing of this chapter in the history of man the last page of which we write today and with the beginning of the new one, the first page together to enjoy the full dignity of human life in peace and prosperity.” 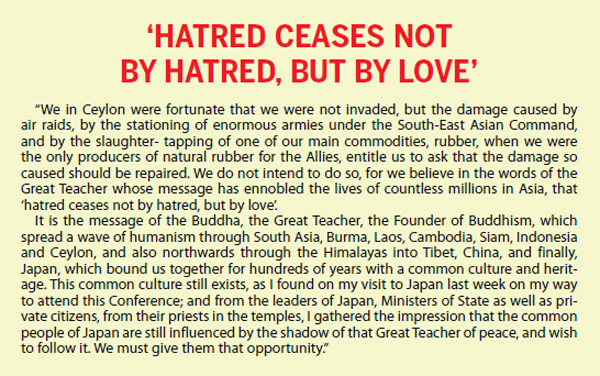